Posted on August 10, 2020 by Ramsundar Lakshminarayanan

Many gurus found American scholars very receptive because Vedanta is compatible with Science. This attracted a lot of seekers[...]

The diffusion of Indian sp 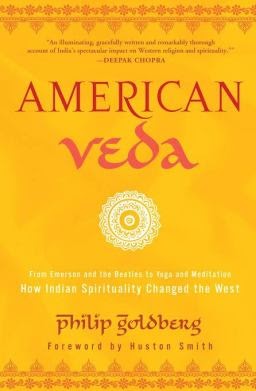 iritual thought in American society is one of the most dramatic chapters in the annals of Indic heritage. The 20th century, led by the United States, saw significant advances in science & technology, the metamorphosis of world order & several match-ups between peace and violence. Vedantic thought acted as a counterpoise to some of these developments.

Illustrating this is author Philip Goldberg in his engrossing book ’American Veda’. The book informs us about the influence of Vedantic thought in America in the last 200+ years. Philip Goldberg packs a wealth of information in this page-turner that will leave the reader to ruminate at every turn and anticipate after every chapter.

Goldberg chronicles the stories of Philosophers, Poets, Authors, Scientists, Political Activists, Self-help scholars, Health and Wellness experts, Musicians, and Entertainers who have found solace in Dharmic wisdom and, in turn, influenced millions of others in the US over two centuries.

From Emerson to Blavatsky, Swami Vivekananda to Yogi, Nicola Tesla to Robert Oppenheimer, Joseph Campbell to Ram Dass, Beatles to Lucas, Ramana Maharishi to Mahesh Yogi, Jiddu Krishnamurthy to Mata Amritanandamayi, the author narrates in a chronological fashion felicitous to the American audience.

There are an estimated 5000+ yoga studios in the US today and this number is increasing steadily. The more popular physical facets of Yoga have been built on the spiritual stratum comes out clearly in eighteen chapters.

He begins with an ‘Executive Summary’ of sorts – runs through the various ‘lines of transmission’ of Eastern philosophies, introduces the reader to Vedanta and Yoga, adduces popular usage of ‘mantra’, ‘guru’ and ‘karma’ and demonstrates “Vedization of America” using various survey results.

Framing the narrative in a relay-like fashion, Goldberg consociates a chain of influencers with the baton of impact passed down from one influencer to the next. He includes a number of key players, their Vedantic evolution and the impact of their work – be it movements, books, tv series, song albums or movies.

I have sampled some of the key influencers here.

The narrative begins with Emerson, Thoreau, and Whitman and the impact Vedanta had on their works in the 18th century. This was the period when Europe was intensely involved in enquiry about Santana Dharma. The Vedantic transmission lines to the United States were kept active by several European scholars, bringing into prominence the bedrock of Dharmic wisdom – “Unity with the Divine” and “Oneness”. Emerson’s clarion call to Harvard Divinity School to seek a direct relationship with the Universe shook the religious establishment. His works, derived from Vishnu Purana and Katha Upanishad, profoundly influenced Thoreau and Whitman evidenced from their literary achievements.

Emerson’s ideas spawned the “New Thought” movement and its by-products, born out of dissatisfaction over Christian Doctrine. Goldberg overviews major players and their works including Theosophical Society (Helena Blavatsky), Christian Science (Mary Baker Eddy) & Unity Church (Filmore) – the latter two most known for downplaying (or ignoring) Vedantic sources. There are few such examples in this book.

The Vedantic “nutrients” of Unity of the divine, Karma & Reincarnation fed the New Thought movement that reached a significant population through Dale Carnegie’s “How to win friends and influence people”, Norman Vincent Peale’s “Power of Positive Thinking” and Rhonda Byrne’s “Secret”.

Read this again: Dale Carnegie’s “How to win friends and influence people”. Let this sink in.

No wonder, the author concludes:

“New Thought has been one of the cracks through which the Vedic light has entered the American psyche”.

The write’-up about Swami Vivekananda “The Handsome Monk in the Orange Robe” starts with an anecdote of his popular address in Chicago followed by a fascinating account of five public intellectuals influenced by “Vivekananda-Ramakrishna lineage” with references to some of their pioneering works. They are Christopher Isherwood (The Song of God: Bhagavad-Gita), Gerald Heard (Pain, Sex and Time), Huston Smith (The World’s Religion), Joseph Campbell (The Hero with a Thousand Faces) and Aldous Huxley (The Perennial Philosophy).

It’s worth noting that Joseph Campbell’s “The Hero with a Thousand Faces” provided the outline for George Lucas’ Star Wars plots.

On Huxley’s reach, the author states:

“news reports were interrupted by announcements of his death – on the day John F Kennedy was assassinated”.

Next, we move on to Paramahansa Yogananda who left an indelible mark on the American public. His book Autobiography of a Yogi (AY) remains one of the most quoted books on Spirituality to this day. Many celebrities have read the book at some point in their lifetime. Be it Steve Jobs or the Beatles Fab Four and hundreds of others who spun off from Yogi’s Self Realization Fellowship (SRF) and launched their own careers in the spread of Vedantic thought.

He reviews two of his best-known American disciples – Roy Eugene Davis and Swami Kriyananda (aka Donald Walters who broke off from SRF later).

Here’s an interesting tidbit: SRF’s monastic leaders are Americans and have Women in key high-ranking positions in contrast to the structure and the semantics of the Vedanta Society. This may have contributed to his popularity, apart from Yogi’s “reverence for Jesus”.

At a time when Mahatma Gandhi was the most known person from India, two others – Sri Aurobindo and Ramana Maharishi, mesmerized the American public with their approach to self-realization. Tiruvannamalai and Pondicherry came to occupy a special place in the Vedantic map of the world. Ramana Maharishi inspired many ‘disseminators of Indian spirituality’ most notably the Indologist Heinrich Zimmer and Joseph Campbell.

Christian Sannyasis Bede Griffiths, Dom Henri Le Saux, and Francis Clooney owe their work to Ramana Maharishi. The author brackets them under “cross-fertilization” whereas modern Indics accuse them of “appropriation” or “digestion”.

Sri Aurobindo’s influence runs deeper than one would imagine. Alan Watts, whose world view was shaped by Vedanta, Zen and Psychedelics came to be known as the “best-known interpreter” of Eastern Philosophy in the West. Apple Founders Steve Jobs and Steve Wozniak brought in science and technology angle to Vedic evolution in the US.

Seekers are those who are inquisitive, have an exploratory mind and a scientific temper to go with. They explore many paths to gain mystical insights. Alan Watts, Ram Dass, and Timothy Leary chose to experiment with Chemicals. Many gurus were averse to such an intrusive approach and were to receive support from unexpected quarters.

Beatles’ trip to India in the late 60s signaled a tectonic shift in the spread of Vedantic practices. This also helped in propagating a more natural and non-intrusive approach to spirituality.

On Beatles’ impact, this is how the author puts it:

“In February 1968 the Beatles went to India for an extended stay with their new guru, Maharishi Mahesh Yogi. It may have been the most momentous spiritual retreat since Jesus spent those forty days in the wilderness”.

Many gurus found American scholars very receptive because Vedanta is compatible with Science. This attracted a lot of seekers willing to take the plunge and set sail on an exploratory journey.

The later chapters become topical while exploring more such gurus.

Goldberg gives the reader glimpses of the baby boomer babas, exposes scandalous gurus & reviews a roster of American gurus (including our very own Pandit Vamadeva Shastri).

The Marxist-Freudian distortions get some space with references to Jeffrey Kripal, Paul Courtright and Wendy Doniger. Rajiv Malhotra, not surprisingly, finds a mention as an expert dealing with this Hinduphobia. Closing chapters include Vedic evolution of key players and their impact on subjects as diverse as Music, Poetry, Science, Medicine, Psychology, and Self-help. The sheer diversity of influence on American culture and daily life will leave the reader wondering: Is there any aspect of American society that is left untouched by Indian spiritual thought?

The scope of work is sweeping, reach is revealing, and the impact is overwhelming.

I’d highly recommend this book for Indics interested in and/or partaking in the emerging Indic renaissance in some shape or form.

Read the book to discover interesting tidbits: The book that influenced Star Wars plots, the connection between Vedanta and Hard rock cafe, understand the terms U-turn theory and Salmon Instinct, and Vedanta’s impact on Christianity and Judaism to name a few. Find out those scholars who acknowledge the Vedic source and those who have indulged in appropriation.

This book is not a study of Vedanta. Instead, it is an exhaustive narrative about a network of influencers and the influenced over two centuries, lists an endless parade of books and references that will compel the passionate to keep coming back for a snippet here and an anecdote there.

This book is a rich tribute to the sacred geography of India, its ancient sages and rishis whose non-exclusive approach to the divine will serve as a torchbearer for peace and harmony in the emerging new world order.

This book review by Ramsundar Lakshminarayanan, an HUA student, was first published in IndicToday website. For more of his articles can be found here.