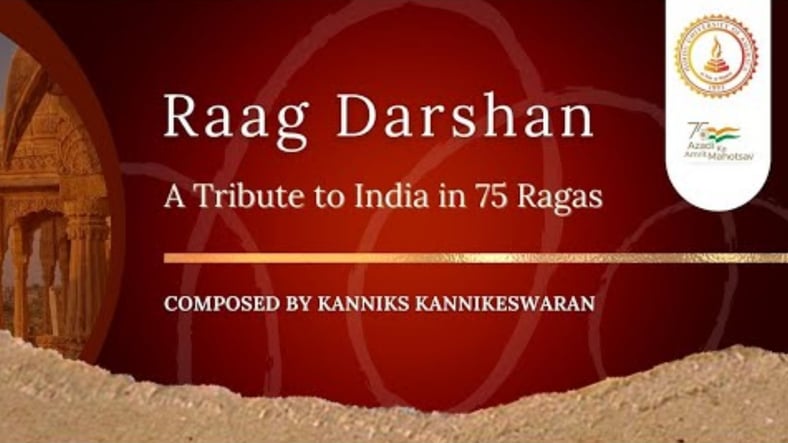 The Hindu University of America celebrated 75 years of India's independence with the release of a music video titled 'Raag Darshan' composed by its faculty member, Dr. Kanniks Kannikeswaran. This magnum opus was released in a formal online 'Azadi ka Amrit Mahotsav' event on Sunday the 14th of August. Raag Darshan is a musical, lyrical, and visual tribute to the timeless Indian ideals and traditions, in a garland of 75 ragas, with lyrics in the Sanskrit language, with contemporary orchestration, sung by a number of popular voices. Conceived, written, composed, and arranged by Dr Kanniks Kannikeswaran, this music video is a monumental work that strives to present a sense of ‘Wonderment' in a collaboration across time-zones and regions. The 18-minute-long composition is presented in 4 roughly equal parts titled - ‘The Civilization’, ‘Sacred Geography’, ‘Colors of India’ and ‘Yoga’.

A string of 75 ragas with the names of ragas embedded in the Sanskrit supported with powerful visuals from all over India, and a series of captions, this music video is a once in a generation kind of production. The lyrical component of the composition is inspired by the Tamil works of Mahakavi Subramanya Bharati. The form of the Ragamalika is inspired by the Classical Music tradition of Muthuswami Dikshitar (1775-1835) and incorporates Raagas from both the North and South Indian traditions of Classical music with raga names encoded into the text.

Dr. Kanniks is known for his pioneering work in Indian American Choral music and a history of over 25 years in building communities through choral music. His earlier music video ‘Rivers of India’ celebrating India’s veneration for water-resources, starring singers Bombay Jayashri and Kaushiki Chakrabarty went viral and received critical acclaim.

A panel consisting of Dr. Sarvajna Dwivedi, a Scientist, Inventor and Entrepreneur, Dr. Sadashiv Dwivedi, Sanskrit Scholar and Director of Bharata Adhyayan Kendra, Banaras Hindu University, Dr. Kalika Uttarkar, Faculty in Hindu Philosophy at HUA, and Dr. Indrani Rampersad, Writer and Journalist from the Hindu Diaspora, Trinidad and Tobago joined Dr. Kanniks Kannikeswaran and President Kalyan Viswanathan for the event. The Panelists lauded the video, its composer, and the spirit of integrating Sanskrit, Sanskriti, Sangeet and Swatantrata that the music video represented. They spoke movingly of the historic moment of the completion of 75 years of India’s independence, and the widespread optimism that it carried for the future. They also highlighted the work that was yet to be done, and possibilities yet to be fulfilled. Dr. Sarvajna Dwivedi said that the celebration might have marked the 75 years of India’s independence, but it portrayed 7500 years of Bharat’s culture and emphasized the importance of institutions such as the Hindu University of America in recovering and restoring that culture. Dr. Indrani Rampersad spoke of the connection that the many generations of the Hindu diaspora who were uprooted during the colonial era, and the struggles they continue to have in preserving their culture and heritage. Dr. Kalika Uttarkar spoke of the need for confidence amongst the Hindus regarding their own cultural and civilizational values. Dr. Sadashiv Dwivedi spoke in Shuddh Hindi and Sanskrit, emphasizing the spiritual foundations of that civilizational Sanskriti.

Mr. Kalyan Viswanathan, President of Hindu University of America, said that on the occasion of the 75th anniversary of India’s independence, through the release of this music video, we celebrate the spirit of creativity and innovation that generates new expressions of ideas that are both ancient and timeless. India may be only 75 years old, but Bharat is ancient and timeless. Too often the sense of modernity that every generation embraces, comes at the expense of the wisdom of the ancients. It is the spirit of Hinduism to harmonize, the past, present, and future, of tradition and innovation, of both continuity and change. As we move boldly into the future, we must also carry that timeless wisdom with us, so that it can be passed on to future generations. What better way to seek that harmony and transcendental vision than through music!

Dr. Kanniks Kannikeswaran explained how this musical video came into being, and the weeks of work that had gone behind its creation. He shared the inspiration behind the video, and the Sanskrit lyrics. Its integration of visuals from all parts of India, from different eras and traditions captures a unique sense of the diversity of Bharat and at the same time, the unity of its underlying spiritual vision. Kanniks went on to explain the intricate connection between the ragas, the text and the visuals that persists throughout the 18-minute-long composition.

Hindu University of America is founded with the vision of promoting dialogue across disciplines, cultures and civilizations while enabling self-discovery, conscious evolution, and harmony. Its mission is to provide education in knowledge systems based in Hindu thought involving critical inquiry, ethics, and self-reflection. Committed to fostering the culture and traditions of Hindu Dharma in an atmosphere of academic excellence and freedom, it prepares students for service, leadership, and global engagement.

Gun-Violence and Dharma – Part II
Why is Ayurveda not considered mainstream in India?
All Posts