Why Hindu Studies are Crucial 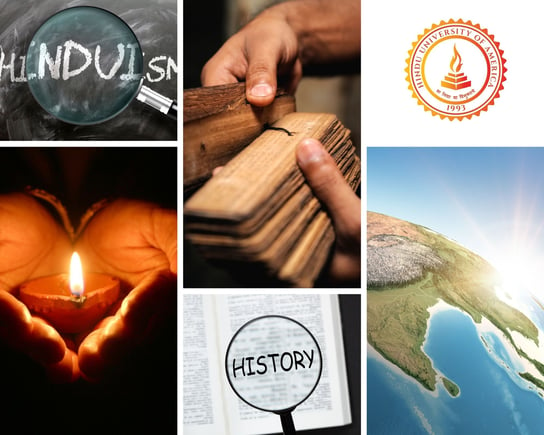 Why is there a sense of apathy towards Hindu Dharma? Is there a need to fight for it or are we too small to take on that fight? Do we engage with and respond to its relentless critics or should we ignore them? How did we allow centuries of damage to its various aspects? How do we take adequate steps to ensure that history doesn’t repeat itself? These are just a few of the questions that Ms. Neena Narumanchi attempts to answer as she discovers the importance of Hindu Studies.

Till I attended a Hindu University of America’s (HUA) webinar on what HUA’s vision and mission are, I had no idea that a parallel world was in existence in the academia.

Once I graduated out of college and entered the work world, I never really paid any attention to what was happening in Colleges, Universities, what was being said and published by Professors, authors, students - in any area for that matter, not just in the area of Hindu studies. And I will not be way off mark if I say that it is true for about 75% to 80% of college-educated Hindus.

Once we fall into the drudgery of making a living, raising a family and building a career, they become all-consuming tasks. Or at least that is what we say to convince ourselves. We refuse to engage our minds in any other task, we refuse to allow us to gain more knowledge unless it has to do with one of the above tasks that I mentioned – and we let the ‘activist’ in us die.

I firmly believe that everyone is born with an activist cell. But most of us let it die un-nourished. When we see something wrong happening, we turn the other way, retreat into our tiny lives convincing ourselves with the following rationale - “This is not my fight.” “This is too large a fight, I cannot possibly win it.” “Why does everything have to be a fight?” “My primary responsibility is towards my family.” “They are just exercising their freedom of speech.” “Hindu or Sanatana Dharma is too great to be affected by a few uninformed or even evil people.” “A fruit bearing tree is the one that gets attacked most, we are a great civilization, that is why we get attacked.” The reasons are endless.

We will reason our inaction till it removes our guilt, so that we can continue to live remorselessly. If this is how educated Hindus are living, then what of the less educated or uneducated Hindus who are further removed from the college campuses? The chances of them knowing about the negative narratives being propagated in academia are even slimmer.

What we never realize is that inactivity sets a precedent very easily. Not raising a voice when something is wrong leads to the wrong becoming the status quo. Our Hindu civilization is one of the greatest, oldest civilizations in existence. I feel just its sheer resilience should awake feelings of wonder, awe, respect and admiration. But instead, we see hatred, fear, anger and ugliness.

How did we get to this current state?

The reason people with Hindu phobia are able to get away doing what they do is because the Hindu world does not have enough number of appropriately skilled people to counter this ugliness, to challenge the false narratives and to correct their behavior.

We have people who have absolute faith in our Dharma but lack academic qualifications and the skills needed to face these perpetrators head on. While we have Hindus that are insiders, they are not well-versed in the academic language or the frameworks with which they can stop the negativity. There are some academicians who have become soldiers in this war but ‘some’ may not be able to lend the intensity needed to tackle this struggle that is playing out in the Western world – the need of the hour is ‘many’.

That leads us to the next question - why are there not enough Hindus as insiders that can mount a resistance? In my opinion, the State as well as the Hindu people themselves are responsible for this.

It is a known fact that Hindu study was throttled in the Indian universities under the cloak of Secularism. Leaders who were nothing more than mere politicians took it upon themselves to destroy the potential of Hindu studies as an area of study that could lead to successful and gainful careers. Hindu study was mostly relegated to non-academic institutions and non-mainstream learning institutions such as Mathas, Vedic schools etc.

The second reason for this sad state of affairs is Hindus themselves. Sanatana Dharma is the epitome of non-materialism. But in spite of following that Dharma, Hindus today have become one of the most selfish, short-sighted and materialistic group of people one can come across. Every decision - especially related to education - is driven with the sole obsession of making the most money.

Every family thinks their children should only choose those areas of study that will lead to lucrative careers in the future. Disciplines such as philosophical studies, Sanskrit studies, religious studies of texts, traditions, other Indic studies have been relegated to inconsequential status. Even the careers related to education and teaching have taken a back seat.

What should be the Future State?

That brings us to the crux of the question as to why Hindu studies are important. Time and again, it has been proven that ignorance and non-action result in loss of power. The Hindu civilization is the oldest surviving civilization today in the world and so it is the bounden duty of those who call themselves Hindus, to take forward this legacy and continue to keep the civilization alive nay reach new heights. This is our responsibility to our future generations.

We are a culture that was a pioneer in all areas of life – from Astronomy to Architecture, from Agriculture to Arts, from Medicine to Mathematics… One can add Linguistics, Gastronomy and a whole range of other topics. And mind you, all this was 5000+ years ago.

Everyone needs to be made aware of our glorious past. To do that, we must first familiarize ourselves with our glory and the path for that is Hindu studies. It is in our blood to shine and achieve glory! Hence, we must do everything possible to shed this slave attitude that we have imbibed over the past several centuries and get back to where we were. To do that also, the path forward is Hindu studies.

The lofty goals mentioned above cannot be achieved through reactionary tweets on Twitter or facing off with someone on Facebook. We need to fight this war with quality and quantity.

The winning strategy is to develop Hindus who are academically qualified to support, defend and propagate the Hindutva paradigm. While YouTube channels and content streaming sites such as Jaipur Dialogues, Nationalist Hub, Citti Media, Sangam Talks, CoHNA, HAF and many others are doing invaluable work in making Hindus aware, motivated, organized and responsive, they need help in systematically dismantling the false narratives spread in the field of education and in educational institutions.

Along the same lines, while temples and religious institutions are the stronghold of our traditions and rituals, they are not exactly harbingers of academic revolutions. We need educationists, academicians, professors, scholars and authors to take on this mantle. Hence HUA and other institutions that are nurturing these voices must be whole-heartedly supported.

There is strength in numbers. Today, the few and far-between voices of the insiders are being drowned, threatened, maligned and cancelled by the strong machinery of the Hindu and Sanskrit dveshis. To make sure those voices do not become feeble and silenced out, more and more voices should join them till we reach the crescendo and Hindutva becomes this deafening roar that nobody can ignore or cancel.

So, while this is an appeal, particularly to the younger demographics to adopt this love for Hindu and Indic studies as a prerogative, people who are not able to adopt a life of Hindu study for various reasons at this juncture in their life must continue to support in other ways. Open your wallets, purse strings and cheque books to contribute as much as you can to support these scholars, institutions and organizations who are doing - in my opinion - existential work.