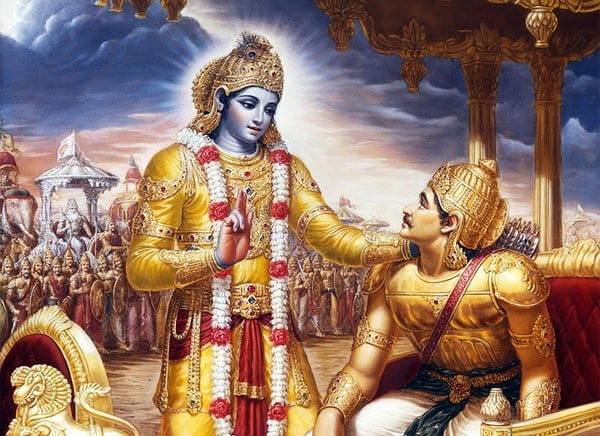 Bhagavān’s expertise in revealing this infinity to Arjuna in a palatable way competently provides the resolution to his, and subsequently, all of humanity’s problems.

These opening words of the Bhagavad Gīta bring to mind recollections of one’s own internal conflict. Arjuna is unclear about what he should do. What is dharma? What is adharma?

While the great Pāṇḍava’s predicament takes place on a literal battlefield, any mortal human being can easily identify with the emotions of confusion, guilt, grief, despair, and helplessness that have overcome him.

Such psychological diseases are unfortunately not at all unfamiliar, and naturally, one gets pulled into the conversation as a silent witness, seeking answers to our very own questions which resonate so intensely within Arjuna’s.

The effectiveness of Krṣna’s response to Arjuna’s mental dilemma must be evaluated, not only by what He says, but when and how He chooses to say it.

At first glance, it is surprising that Bhagavān does not speak until Chapter 2 of the Bhagavad Gīta, but a closer look soon reveals the genius reasoning behind this. Arjuna is allowed to completely empty his mind and heart at Krṣna’s feet, holding nothing back, while the Lord listens intently, offering no interruptions.

In our moments of despair, we all wish to feel heard and understood in totality. Too often, one party listens to the other with the intention of replying, rather than understanding fully, especially when the listener is not in agreement with what is being said. Unsurprisingly, effective communication is lost, resulting in more frustration than the comfort and clarity (or whatever else) one seeks.

Śri Krṣna speaks only when Arjuna’s statement is complete, and only when sreyas is sought. This strategy helps to place Arjuna in a mental state that now allows him to listen with his mind fully engaged, instead of worrying about defending what he has expressed or fearing that he has been misunderstood.

Bhagavān speaks, “as though smiling”, (BG 2.10) and one quickly understands that his intent is not to pacify Arjuna, but to remove the cause of his doubt promptly and effectively. With Śri Krṣna now given the trusted position of Guru, He firmly exercises this right. His words are to the point, commanding Arjuna’s attention by contradicting the perceived root of his despondency and in the same breath, immediately identifying its true cause.

“You grieve for those who are not to be grieved for. Yet you speak words of wisdom.” (BG 2.11)

In retrospect, how much more effective would it have been for us to be shaken sternly out of our stupor by a trusted friend or teacher, rather than be pacified, appeased, and left to wallow in ‘justified’ self-pity? Especially when the situation called for immediate action, as it does on the battlefield of Kurukśetra?

It is interesting that Śri Krṣna utilizes negation (BG 2.12) to bring his point across, and its effectiveness is undoubtable. From Arjuna’s language, Krṣna clearly sees that his śiśya’s self-effulgence has been dulled by many layers of darkness brought on by false identification with the śarira. If knowledge of Self is hidden, understandably, one’s true dharma becomes unclear, and there is no graver problem than this! Krṣna’s use of antithesis quickly and expertly begins peeling away at these layers, exposing them to Arjuna as mithya, that which he is not, in reality.

Once the darkness is removed, the luminous, untouched atma is revealed. Once one’s true self is known, then there is no doubt regarding one’s course of action. Once the layers of that which we are not drops off, what remains is “Tat Twam Asi” (Chandogya Upanishad – 6).

With this understanding, one’s life can then be lived from a vantage point of awareness, rather than attachment to mithya. Krṣna’s discourse on Sat, asat, mithya, nitya, the nature of atman and the understanding that Consciousness is touched neither by performing action (karta), nor the performance of action (karma), brings a great level of clarity to Arjuna, and indeed, to the rest of us who are paying attention.

In times of my own distress, the thought “This is not what you were placed on this earth for” has become a mantra that I live by, its foundation built on received knowledge of the Bhagavad Gīta acquired from various pramanas over the years. While acknowledging that my own trifle problems are but a molecule of dust in comparison to Arjuna’s dilemma, it is difficult for me to imagine that the Brahmajñān being so skillfully imparted to such a Narottama as Kaunteya by the Jagat Guru Bhagavān Śri Krṣna himself, would not be effective in removing the former’s confusion.

Yet, there is no arrogance surrounding the knowledge that is being imparted. Even Paramatma embodied as Śri Krṣna, despite being THE authority over all things, uses references from the Upanishads providing a cogency with the Brahmajñān found therein to validate the eternity of the wisdom He imparts. “In the view of the Upanishads, it is the attainment or gain of the infinite that truly resolves the human problem.” (The Advaita Worldview, Anantanand Rambachan)

Bhagavān’s expertise in revealing this infinity to Arjuna in a palatable way competently provides the resolution to his, and subsequently, all of humanity’s problems.

To Om or Not to Om?
How Hindu Dharma Transformed America: A Reflective Essay
All Posts