The History and Spread of Medicine and Medical Knowledge 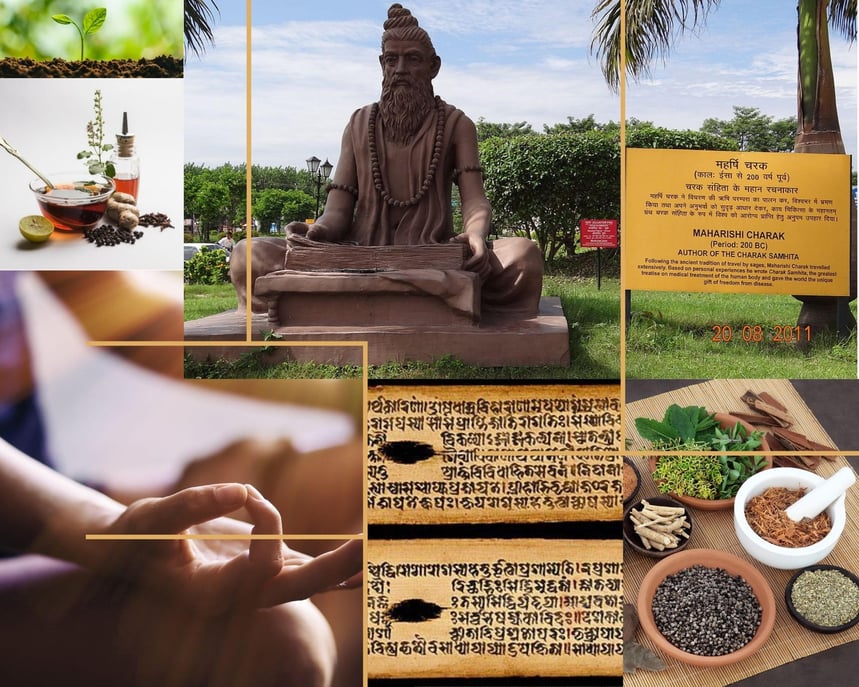 India’s contribution to medicine is a story that needs to be told, especially to the medical students.

Most Medical schools in the world, including the ones in India, try to teach the history of medicine in their chronologic order of development. They mostly start with Greek medical men like Askelopes, Hippocrates (5th cent. CE) and Galen (5-6 Cent. CE) and go on to the more recent ‘father of modern surgery’, John Lester. The names of Susruta and Charaka are glossed over, if that.

The history of Medicine in India starts with the Vedas. Ayurveda, which is still practiced in India, is an upanga (subsidiary) of Atharvaveda. This Veda is roughly dated in the 2nd millennium BCE but it is more likely to be earlier than that. Ayurveda was believed to be received by Dhanvantari from the creator, Brahma. Later, other rishis like Bharadvaja, Angirasa, Brihaspati and Kanva, Nagarjuna and several others have contributed additional knowledge. The medicine practiced in the Vedic period (Up to 500 BCE) was rich in practices of magic for the treatments of diseases although herbal treatments were suggested for many ailments. Conditions such as fever, consumption (Tuberculosis) diarrhea and skin diseases including leprosy have been described.

However, dated at least before the first century BCE (some historians date him as from 3rd century BCE, Rudolf Hoernle dates him as 600 BCE), was a very history-making surgeon, Susruta, who is now accepted as the ‘Father of Surgery’ even by Wikipedia. (Dr. Raj Vedam’s research based on archeo-astrology puts Susruta’s date before 2982 BCE by astronomical position of Krittika mentioned in Satapatha Brahmanas regarding Yagnavalkya’s era.). Susruta learned his art in Kasi (Varanasi) from Dhanvantari, the original physician in the Hindu history. He was the main author of the Susruta Samhita which contained discussions of general principles, Anatomy, Pathology, Diagnosis, Sensorial prognosis, Therapeutics, Pharmaceutics and Toxicology.

The Samhita is in two parts, the first five chapters, considered to be oldest part and a ‘later section’ (Uttaratantra), which was an addition by a Buddhist monk Nagarjuna in the first century CE. Susruta is recorded to have performed many surgical procedures and all of those were passed on to the following generations through his personal teaching and this Samhita. In addition, it deals with medical education, duties of medical students and an oath of care to be taken by the practitioner. It is to be noted that this oath preceded in time of the famous Hippocrates’ oath that is currently administered to trained physicians. The caesarian section was known, as was plastic surgery, and bone setting reached a high degree of skill. Susruta classified surgical operations into eight categories: incision, excision, scarification, puncturing, probing, extraction, evacuation, and drainage.

Susruta lists 101 blunt and 20 sharp instruments made of steel that were used in surgery, see Figure 1. It is to be noted that some or many of those instruments resemble surgical instruments of today! Susruta himself performed and taught many surgical procedures such as incision and drainage of abscesses, puncture of the abdomen to remove fluid, repair of anal fistulas, splinting of fractures, amputations, cataract extraction, glaucoma, rhinoplasty (Gentlemen’s Magazine, 1794), hemorrhoid and Prostate removal, among others. Stones in the bladder were removed by lateral lithotomy, which was introduced into the Western medicine by Galen in the first century CE in Europe. Rhinoplasty was a frequent procedure as cutting off one’s nose was legal punishment for adultery. A flap of skin is loosened from forehead or cheek and reflected over the nose without losing its blood supply. The modern plastic surgery operations appear to have been derived from these techniques.

Fig.1. Illustration of some of the instruments used by Susruta 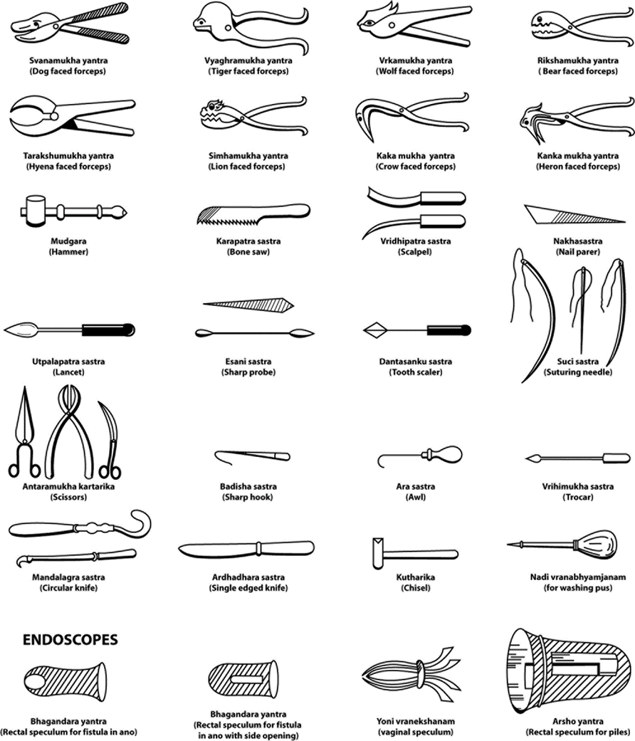 Susruta was using Kshara Karma and Agnikarma which seem to have preceded today’s cauterization by heat or freezing or by electricity.   Alcohol was used as narcotic during operations. There was emphasis on observation and experimentation.

Charaka (Between 100 BCE and 150-200 CE and some people claim as early as 8th century BCE), a medical physician who along with Susruta was one of the principal contributors to Ayurveda. He studied and taught anatomy, physiology, material medica and emphasized the need for prevention of illness. He believed in the principles of Ayurveda - that there are three doshas, Vatha, Pitha and Kapha, whose imbalance causes all diseases. When medications are required to bring back the balance of the doshas, medicines, mostly plant based, were used coupled with required diet modification.

Charaka also taught the medical treatment to a large number of students. Both Susruta and Charaka described recognizing 1,120 diseases including smallpox. Patho-physiology of some diseases is explained in detail. Many of the symptoms and signs for various diseases that were described in the Susruta Samhita can be seen even in modern medicine. Susruta mentioned that Rabies was caused by bite or licks on abraded skin by rabid dogs, cats or even jungle animals like jackals, wolves and monkeys, etc. He goes on to describe the patient of Rabies as having morbid fear of water (called Hydrophobia currently). The first report of Rabies in Mesopotamian literature was recorded in Codex of Eshnunna (1930 BCE), in Greek literature by Democritus (460-370 BCE) and in Persian literature Cannon of Avicenna (980-1037 AD)- all after Susruta.

In the treatment, they emphasized the need to include mind and body (Holistic practice). Control of diet was important in the process of treatment.

The wholistic treatment included Panchakarma (five procedures) consisting of administration of emesis, purgatives, water enemas, oil enemas and sneezing powders. Leeching was practiced when treating certain diseases of blood. This still is the principle for treating Polycythemia, a disease of red blood cells where there is excess production of red blood cells in the body…. only now a patient is being bled into a bag.

Indian materia medica was an extensive collection of indigenous herbal medications. Charaka knew of about 500 medicinal plants and Susruta, 760. Some remedies were obtained from animals, such as milk of various animals, bones and gallstones. Also used were minerals such as sulfur, arsenic, lead, copper, and gold. The physicians made their own medicines from the ingredients. The following is a partial list of physicians of the past India.

*Dr. Raj Vedam’s archeo-astronomical research based on position of Krittika stars mentioned in Satapatha Brahmana, proposes Susruta was from the 3000 BCE period

Autopsy was a well-respected procedure in learning. Cutting a dead body with a sharp instrument was a prohibited procedure in those days by law since it was considered defiling the body.   To circumvent that, Susruta had prescribed the procedure of autopsy that does not use sharp instruments! The cadaver is wrapped by brush, grass or bark, flax etc., put within a cage which is dipped into a slowly flowing river and allowed to decompose for seven nights. After that, the cadaver is removed from the cage and ‘dissected’ by gently rubbing it with brushes, coarse grass or bamboo and thus layers of skin, fat under the skin, muscles, tendons and bones can be examined.

While the Indian system of medicine was being practiced from many Centuries BCE, and improved through 1st century CE, there were several ways the knowledge transfer took place in the 6th century to Iran, Syria and Greece. Dioscorides, a Greek physician in 507 CE wrote a 5 vol. Materia Medica with a large number of Indian herbs and recipe of drugs.

Sassanian (Persian) King Khosrow (Anushiruwan) 531-579 CE sent his physician Borzouye to India to get medical texts. Under Harun al-Rashid, (766-809 CE) in Baghdad, the first translations were performed of Indian works of medicine and pharmacology. He amassed a large collection of books from India and Greece, and it was called the House of Knowledge. In one chapter on Indian medicine, Ibn al-Nadim (998 CE) the names of three of the translators: Mankah, Ibn Dahn, and ʾAbdallah ibn ʾAlī were mentioned. Yūhannā ibn Māsawaiyh cites an Indian textbook in his treatise on ophthalmology.

At-tabari, (between 783 and 870 CE) devotes the last 36 chapters of his Firdaus al-Hikmah to describe the Indian medicine, citing Susruta, Charaka, and the Ashtanga Hriday; “the eightfold Heart”, one of the most important books on Ayurveda, translated between 773 and 808 CE by Ibn Dhan. Rhazes cites in al-Haw and in Kitab al-Mansuri both Susruta and Charaka besides other authors unknown to him by name, whose works he cites as “min kitab al-Hind", “an Indian book".

Meyerhof suggested that the Indian medicine, like the Persian medicine, has mainly influenced the Arabic Materia medica because there is frequent reference to Indian names of herbal medicines and drugs, which were unknown to the Greek medical tradition. Whilst Syrian physicians transmitted the medical knowledge of the ancient Greeks, most likely Persian physicians, probably from the Academy of Gondishapur, were the first intermediates between the Indian and the Arabic medicine Ibn Sina (Avicenna) 11th century Persian philosopher-physician helped his knowledge from Indian medicine to be spread to Europe by his essay, ‘The Cannon of Medicine’ and translating it into Latin.

From the Arabs through their trade route with other Islamic nations, the knowledge went from Arabia to northern African countries into southern Spain. Toledo, in northern Spain had translation schools in the 12th and 13th century which actively translated many books from Arabic finally to Latin. Translations later to European languages followed.

This is how one can trace the antiquity of Indian knowledge and practice of medicine that formed the basis for modern medical practice.

Posted in Yoga and Health, Global Impact of Hinduism, General

Philology Versus Misology
Setting Right the Narrative
All Posts