Dr. Vishwa Adluri receives the Indologist Award from the Govt of India 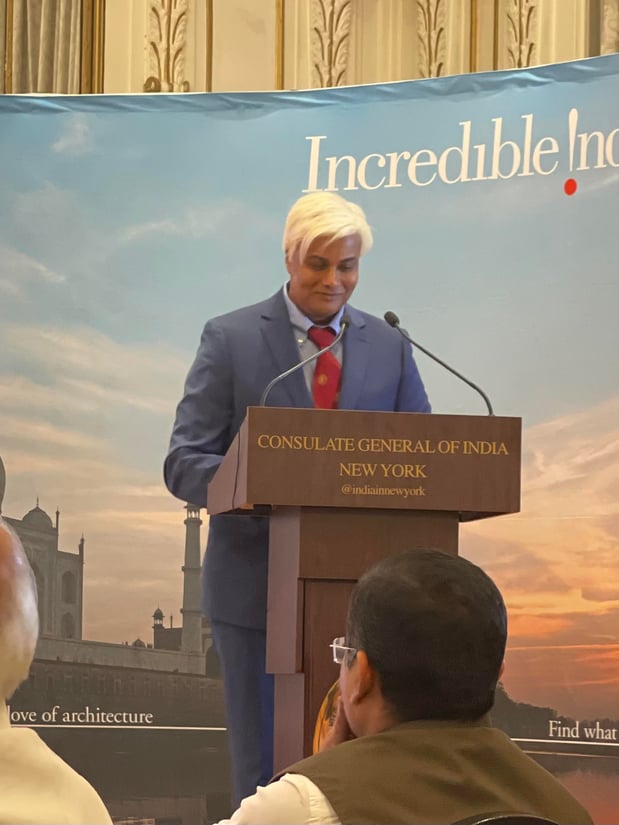 The Hindu University of America family is proud to announce that the Indian Council for Cultural Relations (ICCR), Government of India awarded HUA Professor Vishwa Adluri the “Distinguished Indologist Award” (2019) at a ceremony held at India House, the Consulate General of India, New York, on June 28, 2022. The award was instituted in 2015 during the First World Indology Conference and recognizes the outstanding contributions of “foreign scholars” to research and teaching in the field of Indian studies. (The conferring of the 2019 award was delayed due to the pandemic.) In addition to Dr. Vishwa Adluri, Shri Rajiv Malhotra also received the award for the year 2020.

Dr. Vishwa Adluri currently serves as a Core Doctoral Faculty at Hindu University of America, in addition to his teaching responsibilities at Hunter College, New York. He was honored by ICCR for a lifetime of distinguished service to the profession, publications that have changed the field of Indology, and the students whose careers he has championed. In felicitating Prof. Adluri, the Consul for Political, and Press, Information and Culture, Shri Vipul Dev, of the Indian Consulate, New York City, said “Along the way, he encountered tremendous obstacles as an Indian and as a classicist who dared to reclaim the intellectual heritage of India. You can imagine the resistance Professor Adluri faced when he tried to show that the Mahābhārata - which Western Indologists think was veritable chaos - was a sacred text. Let us all celebrate returning the itihāsa to its rightful place in Indian studies.”

Professor Adluri was recognized as the foremost scholar on the Mahābhārata and celebrated for his contributions to Western and Indian philosophy. He teaches a 6-course graduate level sequence called the Mahābhārata Certificate at Hindu University of America. It is a first such program in the world and seeks to unfold Maharishi Veda Vyasa’s entire itihāsa as the founding text of classical Hinduism: According to Dr. Adluri, in the Mahābhārata we find fully enunciated for the first time, central ideas of temple worship such as the theology of the Goddess, the Trimūrti, avatāra and the four vyūhas, and arcana. Indeed, the very name of India that is Bhārat, is derived from the text. Dr. Vishwa Adluri and his student, Dr. Joydeep Bagchee, wrote a critical analysis of German Indology, exposing German pretensions, passing off their racist and historicist speculations as somehow scientifically authoritative, in their monumental work titled “The Nay Science: A History of German Indology”. The year 2014, when this book was published must be remembered as significant, for multiple reasons, not the least of them being that German Indology will not be the same again, after this moment.

In his acceptance speech, Professor Adluri expressed gratitude to those who have taught, guided, and supported him along the way. “Throughout my life, I have believed that knowledge and the seeking of knowledge is the holiest of human endeavors and I thank God for blessing me with a life of study and for the grace of providing me with outstanding teachers.”

In his closing remarks, Dr. Vinay Sahasrabuddhe, President of the ICCR, noted that the critical responsibility of Indologists today is to communicate the full truth about the core idea of India, which he described as the core of Indology, in language that the global community understands.

Decolonizing Research Methodologies
Gun-Violence and Dharma – Part I
All Posts