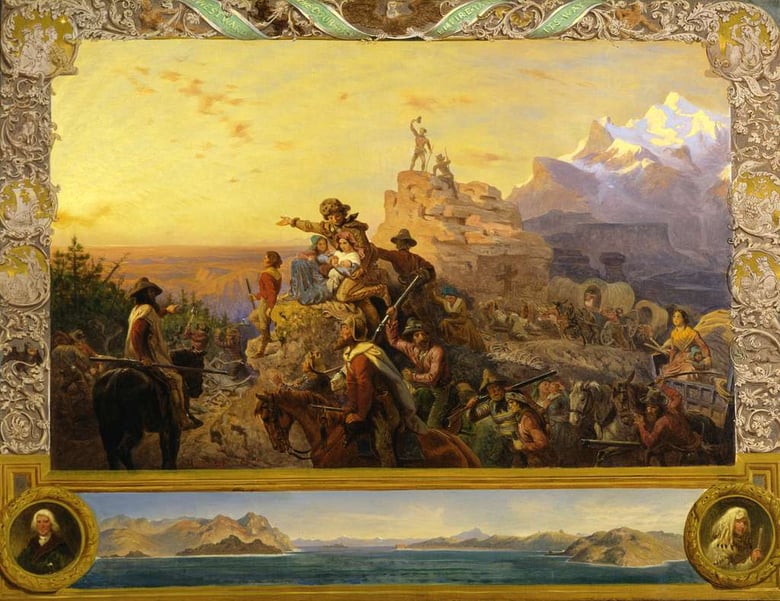 Westward the Course of Empire Takes Its Way is a painted mural displayed behind the western staircase of the House of Representatives chamber in the United States Capitol Building. The mural was painted by Emanuel Gottlieb Leutze in 1861 and symbolizes Manifest Destiny.

As another example, of the way Kshatriya Dharma worked in traditional India, and continues to work is illustrated in the contrast offered by the ongoing conflict between Russia and Ukraine, through the images of innocent civilians in hospitals, schools and other gathering venues ripped apart by weapons of large-scale destruction. These images reek of the Adharmic conduct of war. In stark contrast, wars in ancient and traditional India were confined to the specific swim lanes designated by the warring sides, with the fighting engaged only by Kshatriyas, while the broader community i.e., all other Varnas and Jatis, carried on with its daily activities, certain that the war and violence will not spill over into the non-Kshatriya spheres. Those were the rules of engagement generally accepted and followed on both sides in a Dharmic culture. This principle even sustains today’s India, that is Bharat, for the most part.

The Rise of Adharma

We cannot deny that the societal conditions in the US today are very concerning. Compared to just one generation ago, 84% of people surveyed in a 2019 NPR-IBM Watson Health Poll[1] said Americans are angrier. There are very few compelling reasons to believe in the possibility of a reversal of that sentiment either. Social media has had the unfortunate effect of amplifying hate speech and its causative crimes. With nearly all continents communicating through social media, perpetrators of crime can publicize their acts[2]. The confluence of a disgruntled citizenry, extreme discontent in society, the inability to manage emotions responsibly, and the easy availability[3] of guns makes for a deadly combination. Despite strong barometers of material success over the last decade as measured by property values or financial market performance in the aggregate, are we witnessing a case of civilizational decline in the form of the rise of Adharma in the USA? This pervasive decline is characterized by the choice, that America keeps making, i.e., to prioritize the ubiquitous presence of guns in society that has repeatedly proven to be deadly on unarmed citizenry, as something more important than the safety and wellbeing of its citizens. Without a fundamental reappraisal of such abnormal and perverse priorities, how are changes possible? There was a time when we could trust lawmakers to make certain course-corrections. Is that trust valid anymore, or has it been long eroded?

Such a reappraisal must necessarily consider the history of these gun related amendments, statutes, and regulations. For example, the 1791 second amendment was not some isolated gun regulation. It was preceded by several efforts towards “… prohibiting negroes, slave and free, from carrying weapons including clubs,” ensuring that “… that all such free Mulattoes, Negroes, and Indians...shall appear without arms,” so as to “…prevent negro insurrections.”[4] These laws and statues were enacted in various states through the 1600’s and 1700’s. Even more dramatically, in 1792, just a year after the 2nd amendment was passed, the “Uniform Militia Act of 1792 ‘called for the enrolment of every free, able-bodied white male citizen between the ages of eighteen and forty-five’ to be in the militia and specified that every militia member was to ‘provide himself with a musket or firelock, a bayonet, and ammunition.’” The meaning of the term militia as used in the 2nd amendment is clarified by the this Uniform Militia Act of 1792. These laws and regulations had a different intention and purpose in the 1600’s through the 1800’s i.e., one of proactively arming the white settlers against their non-white enemies, whom they were either subjugating, exterminating or enslaving. After the 13th Amendment was passed in 1865 abolishing slavery, the issue of gun ownership became one of the ‘equal rights’ of non-whites to also own guns, in relation to the whites. The question of whether ordinary members of the country’s citizenry really ought to possess weapons has not, it appears has not been considered effectively till today, outside of the rhetorical echo-chamber of rights of all people. If every citizen is required by law to carry a driver’s license, and acquire liability insurance in order to drive a vehicle, safely on the roads, without being a hazard to others, gun ownership ought to have a much more carefully thought-out process of regulation, is it not? What has prevented such a reappraisal till date, and continues to prevent it?

It is during these times that the wisdom of everlasting principles of human existence envisaged by Hindu Dharma become ever more important. One may ask, how do we apply the concepts of Dharma to synthesize solutions to current issues?

The word Dharma, from the Sanskrit language, is difficult to be reduced to simple definition in English. Dharma can mean transcendental cosmic order, physical order of the universe, social order, ethical behavior, duty or responsibility, community service, right self-expression, or ultimately self-liberation. Furthermore, digging into the root of the word itself, Dhr means uphold, sustain or support. Therefore, when a society has collectively built an environment of peace, harmony, and stability with a concurrent check on the opposite kinds of forces, the potential for prosperity and creativity becomes possible[5]. The exact opposite outcomes manifest when the inverses of the stated factors become dominant.

In other words, Dharma promotes social harmony, while Adharma generates social conflict. This can be a simple operating definition. It becomes imperative, then, that a conscious choice towards creating a Dharmic society is necessary to prevent the alternative spiral of decline from taking further hold. The idea that anyone and everyone in a state may and should possess guns, regardless of their extent or lack of careful preparation and training on how to use weapons, when to use them and when not to use them, is a fundamentally Adharmic choice, which has its attendant and inevitable tragic Karmic consequences. That careful preparation and training, when institutionalized by law and regulation, is a Dharmic choice, and the only way of reversing the course of affairs. For the leaders of a nation to make such a choice, requires them to have some idea of Dharma at least. Insofar as the leaders merely reflect the people of a society, the people also must have a sense of Dharma.

Guns are not just a product to be bought and sold like a commodity. They are deadly weapons, capable of taking lives. The conflict here is between a Vaishya Dharma, the freedom to buy and sell guns as a commodity, without restraints, and a Kshatriya Dharma, where careful training, preparation and self-regulation is a necessary duty, that is inseparable from the privilege of possessing such weapons. When the Vaishya Dharma and a Kshatriya Dharma enter into a seeming confrontation, there must be a framework for resolving that conflict. These Dharmas are not merely mutually conflicting imperatives, that can be settled only through a gunfight, but also have an inherent sense of hierarchy built into them. This is where Hindu thought is infinitely more insightful than a discourse on rights, which has lost its way, into a radical clamour for their inviolability and has no more any space for its counterpart, i.e., a discourse on restraints, duties, responsibilities and obligations. Dharma brings balance, order, justice, it integrates, and responds to the diverse interests in play – It transcends the mere scramble for power. But to actualize this, one must move from the sphere of power-struggles to the sphere of wisdom. That call to move from a sphere of power, of dominance, or control, to the sphere of knowledge, wisdom and peace is the voice of Dharma.

Gun-Violence and Dharma – Part I
Raag Darshan
All Posts