Gun-Violence and Dharma – Part I

Yet another episode of the ever-more-familiar sequence of a random act of violence, the loss of innocent lives, the tremendous sadness that we all share in the wake of such loss, and the “thoughts and prayers” that inevitably follow them, as well as the predictable deadlock and painful helplessness in terms of any real action on ground, from the country’s leadership is playing out once more on the American Independence Day of 2022. In the USA, at least, the possibility that we (as in any one of us) may any day become a victim of a random act of violence in the schools, colleges, campuses, theatres, concerts, at the supermarket, and even at the Fourth of July parade is increasingly real. Are these acts of violence aberrations? Or have they become the norm in an advanced civilized society like the USA? Is this how a civilized, advanced society is meant to be?

If the American civilization as we have come to cherish and respect has entered a spiral of self-destruction, as it appears to be, is there still an opportunity to reverse course? What is the way out of senseless violence plaguing American society today? Or do we simply have to accept that everyday a certain number of people randomly will have to be sacrificed, as unavoidable collateral damage, to uphold the ‘freedom’ of Gun ownership for the people and the ‘freedom’ to maximize gun sales for the corporations?

What does Hindu Dharma have anything to do with domestic gun violence that the USA is witnessing all too frequently? What does it have to say about ownership and use of guns or any weapons for that matter? In this sequence of two articles, we will examine this issue through the lens of Hindu Dharma.

Ownership of a gun is a deemed fundamental right in the US Constitution[1], as enshrined in its second amendment passed in 1791, which reads “A well-regulated Militia, being necessary to the security of a free State, the right of the people to keep and bear Arms, shall not be infringed.” This has often been read in a way that means that anyone in the US can keep and bear arms, i.e., legally possess a weapon of destruction. It is understandable that a trained military officer or soldier, who is a member of a well-regulated entity, such as the military or the police, may necessarily keep and bear arms to perform his duties, but what is the relationship between any private citizen i.e., the people and a ‘well-regulated militia’ that the second amendment references? Herein lies an enormous space for mischievous interpretation. There appears to be no guidelines in the constitution about how a gun may be used except for a vague hint about sport hunting. The US Department of Justice website[2] says that “Americans have a right to defend their homes, and nothing should undermine this right; nor does anyone question that the Constitution protects the right of hunters to own and keep sporting guns for hunting any more than anyone would challenge the right to own and keep fishing rods and other equipment for fishing.” The reality is gun ownership is a key causal factor for unnatural mortality in the US. The data on this is beyond ambiguous.

In 2021, in the US alone, 45,010 human lives were lost due to some form of gun violence[3]. Nearly a quarter million souls (240,512) have been lost just in the 5-year period ending 2021 and yet nothing in the horizon appears to be able to put a stop to this senseless, deliberate, and preventable loss of lives. Lawmakers in the USA are trapped in a tragic quagmire, justifying the importance of the “freedom to own and sell guns” on the one hand, and lamenting the loss of innocent lives, with their all-too-frequent “thoughts and prayers” on the other hand, apparently in utter bewilderment as to how one could be correlated with the other. 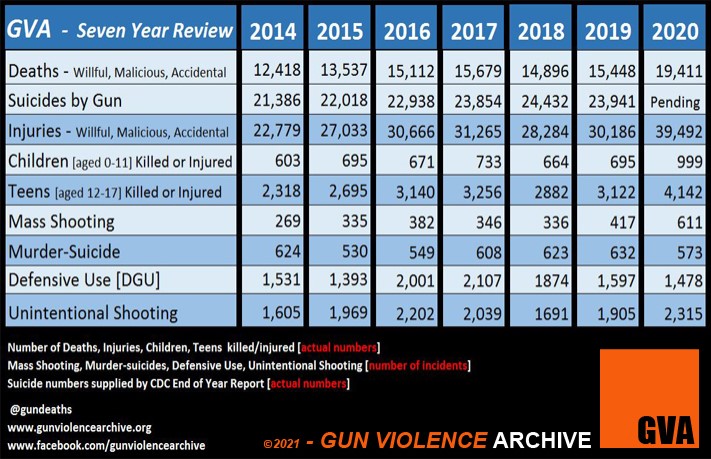 Nearly 20 million guns (about 6,000 for every 100,000 people) were sold in the US in 2021[4]. Two reasons have been proposed as key drivers of gun sales[5]: (1) protection against a potential breakdown in civil society and (2) acquisition of the firearm ahead of any potential government intervention on gun ownership. Co-incidentally, a breakdown in civil society especially as it pertains to the peaceful transfer of power after a democratic election has just concluded, is not something America can turn a blind eye towards anymore. Perversely, gun sales also tend to spike after mass shootings[6]. This means that to promote gun sales, these sporadic shooting events, and loss of life, are quite helpful, even if they are not pre-planned. According to Firearm Industry Trade Association, 2021 the firearm and ammunition industry employed ~376,000 people and was responsible for ~$70 billion in total economic activity in the US in 2021[7], indicating that it is a lucrative market for a variety of industries. These beliefs and facts make it extremely difficult for legislative interventions to change course.

A comparative study of India along the same or similar metrics reveals that there is no gun industry for the domestic civilian market. There are no legal provisions for ordinary citizens to own a gun except perhaps for non-violent competitive target shooting activity. Manufacturing activity around guns and ammunitions are for either domestic military, paramilitary and state police use or for exports[8]. More importantly, the civilians in India do not aspire to own guns for domestic self-defence. They leave this matter to the community of people engaged in law-enforcement, and the military, by and large. Of course, there are exceptions, such as criminals and mafia gangs and so on, but they are exceptions by and large, and not the norm. The Dharma of Violence

The natural question is then why does the Indian society seem to be the opposite to the US on guns, and gun related laws, especially when on every other matter, it seems to want to do nothing more than copy the west? A review of the social history of India provides a few explanations.

For thousands of years, social interactions in Indian society were framed by Hindu Dharma, specifically the Dharmashastras. These treatises on Dharma included extensive thought and writings on religion, ethics, society, and politics. Also embodied in these texts of profound insights were codes of conduct formulated by realized masters such as Manu, Yagnavalkya, and others. In particular, the Dharmashastras never sanctioned ownership of weapons to private citizens. The Protectors of the people, i.e., the Kshatriyas, so designated by their character (Guna) and choice of work (Karma), were the only community officially called upon and expected to carry arms for one purpose - defence of the state and its citizens, and the enforcement of law and order. That other members of the society i.e., other communities never aspired to own weapons was well understood by society, a characteristic behavior that continues even today.

Kshatriyas have always lived and transacted with the rest of the Hindu community on a mutually cooperative, inter-dependent basis, within the framework of Dharma. A true Kshatriya will never confront an unarmed member of the society for doing so will go against Dharma. Chapter 18, verse 43 of the Bhagavad Gita says,

Valour, strength, fortitude, skill in weaponry, resolve never to retreat from battle, large-heartedness in charity, and leadership abilities, these are the natural qualities of “Kṣhātraṁ Karma.”

That immensely stable structure, called the Varna-Jati social order, protected by the Kshatriyas, prevailed in conditions of a stable peace for thousands of years. That it broke down in the face of relentless outside pressure, from both Islam and Christianity, and gave rise to the enormous problem of the Dalit and Subaltern community, which it could not reabsorb subsequently is a story for another day.

Since independence in 1947, the Indian Polity, despite ravages from invasions and colonial incursions, has somehow maintained the essential spirit of the Dharmashastras as it pertains to private ownership of weapons. In other words, despite the fact that the constitution of today’s India, is largely an exercise to replace the duties of individuals and communities as espoused in the Dharmashastras with “rights” of citizens – a concept borrowed from Western ideals of state constitution, not only is private ownership of arms not sanctioned by the constitution as a fundamental right, but the broader society itself continues to live by its code of traditional Dharma for the most part, at least in this regard i.e., it does not demand the private ownership of weapons as a right of all its citizens.

Dr. Vishwa Adluri receives the Distinguished Indologist Award from the Govt. of India
Gun-Violence and Dharma – Part II
All Posts