How would you react if you were told that the Periodic Table and Maslow’s Model both have their roots in India? Here’s an interesting blog post by Keshav Goyalji that describes how a thought traveled from India to other countries by taking the examples of Samskrit Varnamala and Panchkosh, and how they ‘inspired’ the development of Periodic Table and Maslow’s model respectively.


Dmitri Mendeleev, a Russian chemist developed Periodic Table in 1869. He used a framework to group and arrange them logically based on their characteristics. Elements with similar behavior were grouped into columns. Rows contain elements that exhibit same pattern of traits like the typical elements.

He also postulated a method to discover more elements. The number of elements identified by him was 56. Now that number has gone up to 118. Mendeleev presented the Periodic Table as a two-dimensional array, as shown in Figure 1, to help understand and explore the chemistry in nature, i.e., a repetitive pattern in the nature of elements in nature. As you may be aware, the Periodic Table contains rows of increasing atomic weight (number) and columns with groups of elements depending on their atomic structure and valency.

With regard to rows, the lead row, in this table, contains the “typical” element for that group while subsequent rows contain elements that exhibit the same pattern of traits like the typical element. For example, sodium is a typical alkali, chlorine a typical halogen, helium a typical noble gas etc.

Samskrit alphabet, shown in Figure 2, has swara (sound) that can be spoken independently and vyanjana which cannot be spoken without a swara. 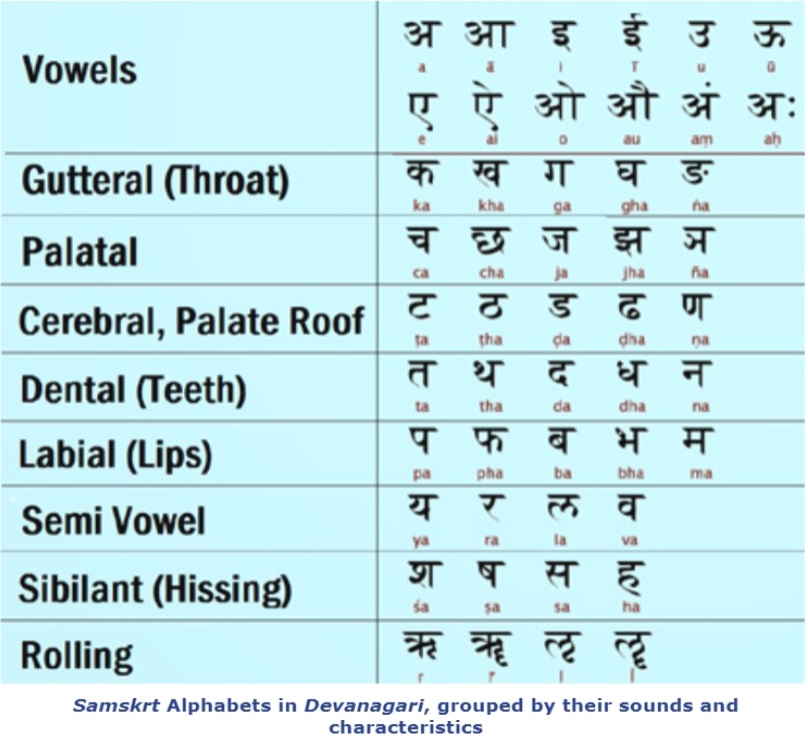 Samskrit Varnmala table (Figure 2) is a two-dimensional array with columns of increased aspiration of air while pronouncing and rows of decreased area of contact of tongue with the contours of mouth. This grouping is based on (i) effort made to produce sound-prayatna (ii) location of tongue-sthan, (iii) force with which the sound is released-bala, (iv) duration of sound-kala.  This arrangement has been explained by Panini, the samskrit grammarian.

Dmitri Mendeleev, a professor of Chemistry and his friend Otto Bohtlingk, a professor of Samskrit worked at University of St. Petersburg. At that time, former was working on a chemistry text book and Periodic Table and the latter on the second edition of his book on Panini.

Baku, a city near Caspian Sea, was a trade center through which Indian goods coming by sea route went to Russia and western Europe. This city flourished as a center for fire worship more than two millennia ago. This area is rich in oil. Natural gas emanating from oil wells keeps the fire burning at Ateshgah fire temple at all times.

Baku has been a pilgrimage place for many Vedic fire worshippers, Samskrit scholars and priests from India even up to 1800s. Dmitri stayed in a cabin located at the main gate of this fire temple many times since 1862 to investigate the composition of petroleum to help local producers as well as the Noble brothers, Ludvig and Robert, who had stake in oil fields in Baku. Living in the same temple premises in Baku where there were rooms for priests and pilgrims, Dmitri would have had many opportunities to interact with Samskrit scholars (priests).

This interaction may have given the shape of two- dimensional Periodic Table (Figure 1) similar to Samskrit Varnmala (Figure 2). While predicting future elements, Mendeleev used Samskrit based names such as, eka aluminium (Gallium), dvi tellurium (Polonium), tri-manganese (Rhenium) and so on.


In Indian thought process, the mind is not a small matter. It led to creation itself. According to Nasadiya sukta in Rig Veda, the seeds of mind manifested first. Their aggression led to a process of manifestation of subtle matter leading to the Big Bang, which then spewed out the gross matter.

The mind is not an organ of brain but is spread across creation and even in that which existed before the creation.  Therefore, mind is a continuum (Brahman-big mind) before as well as after the creation. All of space-time and creation seems to be in one single mind in more ways than one. We are connected to the Universe through our mind and therefore, we all are connected. This allows us to influence others through our mind if our “connect” is preserved (present).

Mind science (Manovidya) is collective understanding of the mind, memory, intellect, ego, consciousness etc. Manovidya should not be mistakenly equated with limited science such as psychology or Mano Vigyan.

According to Indian thought, we have a dual existence, (i) a physical body (diversity) and (ii) a subtle self, free to mingle in universal homogeneity (unity). For our existence, it is necessary that our being (physical existence-discrete) is in equilibrium with the rest of the universe (gross matter in cosmos) by being conscious and mindful. This awareness about the two-sided nature of creation is commonly called as “unity in diversity”.

The awareness of being bounded by a physical body gave Indian civilization an urge to be tolerant, open minded and liberated.

Annamaya kosha is made up of 5 elements (space, air, fire, water, and earth). Pranmaya kosha has 5 prans: pran, apan, samana, vyan and udan and they regulate the functioning of the body. The next is manomaya kasha, which is more powerful than the preceding two. The mind brings about a change inside as well as outside of a human being.  Without the mind, there would be only inertia in the world. Gyanmaya kosha relates to deeper knowledge that helps one discern, differentiate, probe and penetrate. The fifth sheath is anandmaya kosha, a state of bliss, calm and tranquility.  This is the state of atma. There is no imbalance due to pain or pleasure in this kosh.

In other words, we need a body to have a life (pran), need a life to have a mind, need a mind to be aware (intellect), and need an awareness to enjoy bliss. These sheaths, therefore, enable a being to exist, live, feel, know and enjoy.

Those who can recognize their mind (mana) are called Manav. Those who become aware of their intellect and consciousness are called Gyani. Animals and birds remain in realm of pranamaya kosha are called prani (creatures).

The lowest sheath is bound to earth. Pran is bound within the physical dimension of space. Mind goes beyond realm of space-time continuum or universe (Brahmand). Consciousness (intellect) can reach out to many universes (Akhil koti Brahmanda). Soul (atma) can go further in to the core of creation (Srishti). It is also called Narayan.

Abraham Maslow, a Russian, developed a motivational theory about man’s hierarchical needs for management studies during the second half of 1900s. Maslow’s concept has five levels: food, health, goodness, knowledge and bliss as shown in Figure 4. These levels express respectively, comfort, safety, being part of a group, fame, and finally I am me. The first two cover basic needs, next two cover psychological needs and the fifth covers self-fulfillment needs of an individual.

Initially, Maslow stated that individuals must satisfy lower-level deficit needs before progressing on to meet higher level growth needs. However, in 1987, he clarified that satisfaction of a need is not an “all-or-none” phenomenon, admitting that his earlier statements may have given “the false impression that a need must be satisfied 100 percent before the next need emerges”.

This pyramid shaped theory, shown in Figure 4, is similar to the Panchkosh concept, discussed earlier. Interestingly, the word Maslow means butter (oil) in Russian language. The word Makkhan (butter) in India became maska in Persia. That, in turn, became Maslow (maslo) in Russia.

Setting Right the Narrative
Why Hindu Studies are Crucial
All Posts