A look into the history of ancient health practices in India which included smallpox inoculation, a prescription of for balanced lifestyle with moderate eating and exercises, quarantine, self-isolation and responsible living.

Many of you may remember your grandmother insisting you to clean your hands and feet before every meal. Having a bath in the morning is a ritual whatever the season and so is leaving footwear outside the house. Till recently these were considered old fashioned but with the Covid- 19 pandemic striking the world suddenly these practices seem to have a new meaning. Namaste the Indian way of greeting is being followed by leaders all over the world. As we follow the WHO directive to wash our hands for twenty second with soap and water and maintain social distancing there is also a sense of deep respect and dejavu on many of our Indian practices too.

Did you know that there was a system of vaccination in India even as recent as 1804 until the British put an end to the practice. Dr. John Z Holwell, a surgeon who was serving the East India Company has observed and recorded the Indian system of inoculation. His records state there were designated people from distant provinces who would come annually, divide themselves into smaller groups of two or three and visit all the villages. They would plan their circuit in such a way that they would arrive at the place at the right time. Smallpox was most prevalent at the time and these physicians would administer the Tika called Govasuri (cowpox). This system was effective as there was no epidemic of smallpox ever recorded until the British stopped the practice after the discovery of Jenner’s smallpox vaccination which in turn was based on studying the Indian system. 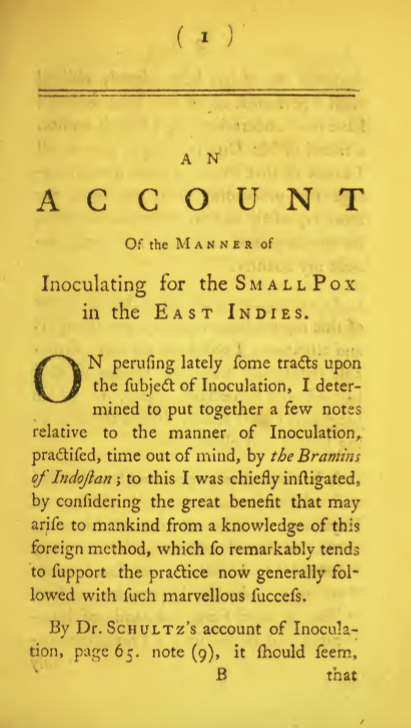 Screenshot of the page 1 of the book by Dr. John Zephaniah Holwell

Here are two excerpts from Dr. John Zephaniah Holwell’s book - “ An Account of the Manner of Inoculating for the Small Pox in the East Indies with Some Observations on the Practice and Mode of Treating that Disease in those Parts” taken from pages 1 & 2 of the book.

“On perusing lately some tracts upon the subject of Inoculation, I determined to put together a few notes relative to the manner of Inoculation, practised, time out of mind, by the Bramins of Indostan; to this I was chiefly instigated, by considering the great benefit that may arise to mankind from a knowledge of this foreign method, which so remarkably tends to support the practice now generally followed with such marvellous success.”

“The general state of this distemper in the Provinces of Bengall (to which these observations are limited) is such, that for five and sometimes six years together, it passes in a manner unnoticed, from the few that are attacked with it; for the complexion of it in these years is generally so benign as to cause very little alarm; and notwithstanding the multitudes that are every year inoculated in the usual season, it adds no malignity to the disease taken in the natural way, nor spreads the infection, as is commonly imagined in Europe.”

These two excerpts give us a glimpse of the how inoculation was in practice in pre-British India.

The physicians of yore knew the existence of microscopic bacteria and virus, its nature and prevention from its effects. Interestingly, Atharva Veda mentions germs that cannot be seen and uses the term Kirmi for microscopic creatures. Charaka Samhita, a treatise on medicine describes microorganisms as being invisible, and also mentions their colour and shape. Did they have a microscope to see and describe them in such detail? Nyaaya Samhita of Gautama does have a description of lenses.

The Art of Living lies in Balance

It is said “Ati Sarvatra Varjayet” which means Excess of anything is bad. The answer lies in the balance.

So the principle of living is to find the right balance between diet and lifestyle, rest and work, prevention and cure. As we now see the most robust health care systems considered the best in the world are stressed as they struggle to find a viable solution, preventive measures are being stressed all over the world from quarantine to isolation and simple diet.

Quarantine & Isolation is not a new word for Indians

World over people are grappling with the sudden loss of freedom and restricted movement and social distancing norms. Growing up in India almost everyone would have experienced seclusion as part of ritual observance at some point or the other. Various practices in the Indian systems have used isolation as a cure to prevent contagious diseases and also as a means to contain the problem in a small area even the Gods are not spared. In Jagannath Puri, during Jyeshta Poornima, the lord is kept in isolation for 14 days. Deities in India are also treated as a human being who requires to be bathed and fed, to recuperate and rejuvenate. Traditionally, the newborn and the young mother are secured from outside influence for a period of 10 to 15 days after birth, termed as superstition we know now that at this state both the mother and child are susceptible to infections and seclusion is necessary for their own good.

Similarly, an isolation period is observed by all members of the family if there is a death in the family, the 13 to 16 days helps one to recoup from the emotional pain which is then followed by celebration of life on the last day of isolation.

Though followed as tradition, many of the practices have practical application. Some of best practices of personal hygiene and ‘social distancing’ have been part of our ‘Kalachar’-culture, customs like leaving the footwear outside the homes, not having food or water from a common vessel, maintaining physical distance, having a bath every day are universally followed in India.

The wisdom in the word Food is medicine has never been more relevant. The native systems of medicine have always advised on the principle of balanced living, eating in moderation and consuming food according to the seasons and place. Food must be consumed such that the 3 Dosha – Vata, Pitta and Kapha and the 3 Guna – Satva, Rajas and Tamas remain in balance because the imbalance of these Dosha and Guna lead to disease and discomfort.

Fad diets, alien cuisine, packaged-ready-to-eat food have alienated us from the experience of having a simple meal. Now is the right time to pause and think and maybe realign ourselves to the environment. Beginning with consuming food that is wholesome, sourced from the local market and grown in that region. Not only are they more nutritious but it will also directly support the local economy and benefit the immediate farmer who has grown the crop.

Of Inheritance and Responsibility

As humans we have inherited the earth. Other living creatures also have an equal right to its resources. Our conscious and ethical choices have a large and long term impact on the environment. It’s only humans who over-exploit natural resources at the cost of destroying the very nature that is sustaining them. The destruction of forests, drinking water sources depleting at an alarming rate are all a warning for us to get back to our true nature and allow mother earth to sustain us.

We are the virus that Nature chooses to eliminate.

This article first appeared on Religion World on May 17, 2020 with the tags: Ayurveda, Hinduism, world health day. It has been reproduced with the permission of the authors, with some additions by HUA staff.

Posted in Yoga and Health, Global Impact of Hinduism