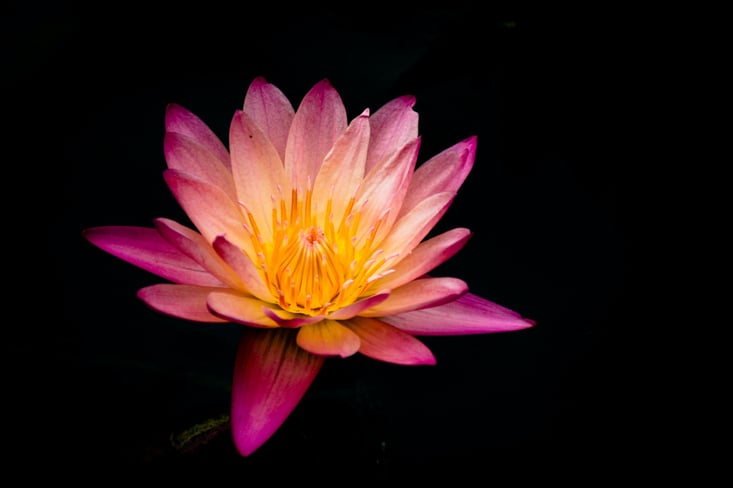 There was a void in the West, and the wisdom that was so abundant in the East flowed here easily and effortlessly.

Having the luxury to consider this topic over the past few months has allowed me to contemplate many ideas, letting them germinate and take form in my consciousness.

In looking at the influence of Hindu dharma on American culture, I have come to believe in an innate link between it and the rapid growth of technology. The world essentially evolved into a petri dish for hybridization as travel became more accessible, telecommunications allowed for near real-time exchanges, and once here, media and marketing outlets provided rapid growth in its exposure to foreign cultures.

In considering the world of the 19th century, before air travel, a trip from India to this continent, or even to Europe, was a major production. Travel between East and West was expensive, time consuming, and physically challenging. During the late 1800’s and early 1900s, as Blavatsky established the Theosophical foundation, Vivekananda came to the US and later Yogananda followed suit, American interest in "the Orient" had already begun to rise. Of course, the many intellectuals throughout the British Empire who had had relatively easy access to all things Indian through the colonization of that vast country had already produced a significant body of work on India, Hinduism and its precepts. This fascination with the East wasn’t limited to Hinduism. In Chicago, construction of the first and only North American Baha’i temple began in the 1920's and was finally completed in 1953. The migration of ideas had certainly become “a thing.”

In Europe, and by definition America, our western religious traditions had derived from Judaism. Christians, Catholics, Muslims and Jews were known as "people of the book". Their version of God was mostly depicted as jealous, angry and judgmental, with life on earth being primarily a testing ground or a last chance for groveling sinners to prove their worth. Even the Protestants and Evangelicals who envisioned the loving savior, Jesus Christ, believed that Hell awaited those who did not “find” Jesus and accept Him as their personal savior. In contrast, no such fate awaited followers of the Eastern faiths, where a plethora of options – ranging from reincarnation to “burning away” karma, the principles of yoga (yamas and niyamas, Krishna’s sermon to Arjuna), Vipassana and Advaita brought rich fodder to those seeking a new spiritual path.

Early in the 20th century, Buddhism, Hinduism, Jainism, Zoroastrianism, Taoism and Confucianism had rarely been seen in the West. Those intrigued with the possibility of discovering a paradigm beyond their own traditions could grab onto something new, something that promised to be more resonant with their more spiritual longings.

As some of India’s earlier gurus had set the foundation and paved a path in America, a second wave began to emerge in the late 1950's with Maharishi and Transcendental Meditation. The '60's were populated by a post-war generation, baby-boomers who were soon coming of age. Like the upper crust in Britain and the wealthy patrons of esoteric thought providers in the US at the turn of the century, the interest was high amidst a level of affluence that had probably been unseen before. People were comfortable, there was time for "contemplating one's navel", and enhanced by the accepted and accessible use of hallucinogens and cannabis in the 60’s and 70’s, there was a warm welcome and little resistance in these circles to such new ideas.

In pockets where poetry, mystic thought and "anti-establishment" perspectives were the norm, the transfer of ideas from East to West increased. Figures like Allan Watts and T.S. Elliot, not to mention the foundation that the Transcendentalists had left behind, widely influenced coming-of-age Americans from the 1940's through the 1960's. Krishnamoorthi’s influence among Bay Area intellectuals and Yogananda’s presence in Southern CA paved the way for Maharishi and Swami Prabhupada. Although their large-scale efforts to bring Hindhu dharma and practices to the US were still fringe, they had developed significant followings, interest, and credibility. When the Beatles and other celebrities embraced Transcendental Meditation, the fate of an anchored interest in Indian thought and music in America and Europe was sealed.

When in the 1970’s Ram Das returned to the US with his love of his guru and the Vedic philosophy he had learned, many followed him to meet Neem Karoli Baba and other saints in India. Yoga was becoming mainstream. Zakir Husein was someone many Americans had heard of. Ram Das’s book, BE HERE NOW, was published, and reading it was the rage in alternative bookstores and yoga communities. By the late 1900’s, other saints from India were arriving more regularly, bringing books, customs, music and dharma to increasing numbers of people. This, along with the advent of yoga, kirtan and the change in demographics with more and more Indians taking visible, powerful roles in America, only increased the momentum and the breadth of how Indian precepts and customs were expanding their reach in the US.

Authors like Elizabeth Gilbert, who wrote Eat, Pray, Love in the early 21st century, brought vivid descriptions of ashram-living into mainstream literature and film. Even a few Bollywood films made their way to our film festivals and private networks such as Netflix, as well as in-flight movie options on mainstream US and international airlines, carried Indian films.

Ashrams and yoga centers have begun to pop up all over the country in the past 60 years, and have since planted roots in their communities. There’s no chance that they will do anything but thrive. With YouTube and Facebook, Instagram and cable/private TV channels, Zoom and other online live platforms, accessibility to the teachings and teachers is rising exponentially. The idea of a karma yoga experience fits our culture’s leaning toward “a gap year” for kids between high school and college, and for young people who are searching in their 20’s. Places like Mount Madonna, Shivananda, Art of Living and Amma’s MA Centers are just a few of the options available.

As a psychotherapist who had exposure to world religions in the 70’s, I have found over the years that integrating Hindu dharma into my work has enhanced my efficacy as a therapist. Specifically my connection with Amma permeates my home and professional life, and I am able to give even more to those who come to me. I am seeing and hearing myself offer what I’ve learned from all of these sources – when I can do it organically, without name dropping or being evangelical in the process.

I think, in summary, this was all meant to be – there was a void in the West, and the wisdom that was so abundant in the East flowed here easily and effortlessly.

I loved the overview you shared in the class; it was seamless, thorough and filled with anecdotes that brought the figures to life.