Posted on November 12, 2021 by Venkat Nagarajan 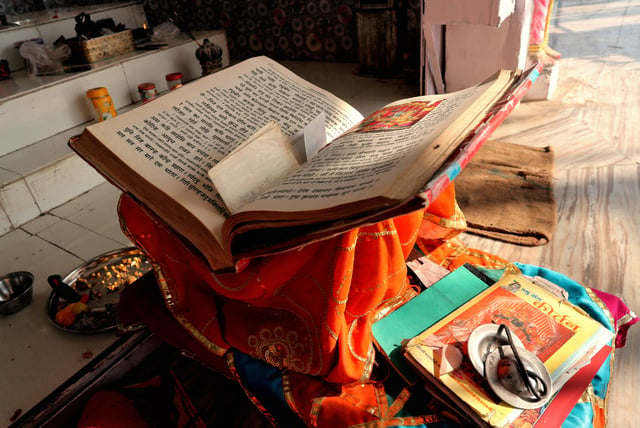 The vast majority of Western scholars, who call themselves Indologists, approach ancient Indian texts with a sense of skepticism and view them as objects to be exploited. Most scholars have attempted to understand Indian texts from a purely historical perspective. Their efforts at studying the text focus on answering questions such as when was the text written? Is there a single author or multiple authors? Can the original text before redactions and interpolations be reconstituted? Can the stages of interpolation be identified along with their underlying motivations? and so on. This framework looks at the text through a lens of skepticism and views it as an object to be manipulated and dissected to create speculative historical narratives. It completely ignores the commentarial tradition which has studied the text from a philosophical perspective for more than a millennium and dismisses it as subjective and partial and a product of prejudice and superstition.

The efforts of these scholars are primarily motivated by an attempt to support and further their religious or other ideologies or to enhance their self-interest. [1] Their efforts have not resulted in any knowledge or findings that have contributed to the improvement of society or helped individuals lead more productive and happier lives. On the contrary, by placing trust in their unsound and highly speculative arguments, many individuals have developed a strong dislike for humankind and society or have become misanthropes.

Many Indians have placed their trust in Indologists because they were convinced by the Indologists’ argument that Indology’s method of studying ancient Indian texts is superior to the traditional method, being secular and based on reason. These Indians, who were not competent in crafting arguments, placed their trust in Indologists and Indology. They felt betrayed by the Indologists when the Indologists concluded that their ancient texts do not contain any meaningful or worthy insights about life and are simply filled with “a mass of incongruencies, absurdities, and contradictions.”[2] As a result, these Indians lost faith in reason, concerning Indian texts, and began questioning the motivations of everyone, both the Indologists as well as those who have crafted effective and sound arguments against Indology. As I will demonstrate, the Indians also developed a dislike of Indian texts and culture due to the manipulations and distortions of them by Indologists. Given this, can one reasonably conclude that these scholars are engaging in philology?

To establish that Western scholars’ study of ancient Indian texts is not consistent with this definition of philology, I analyze their framework for studying Indian texts, their underlying motivations, and the highly disparate conclusions that their framework and motivations generated. My analysis is based on the review of three German Indologists, who are pioneers in the field of German Indology and whose work heavily influenced and shaped the work of later Indologists both in Germany and around the world.

Adolf Holtzmann Jr. was the “first Indologist to make reconstruction of the original”[4] texts the primary goal of his study of the Mahābhārata and the Bhagavadgītā. His approach to studying Indian texts was highly influenced by his zeal to prove that the epic traditions of the Greeks, the Germans, and the Indians were branches of a common heritage.[5] He saw the Kṣatriyas as members of a noble Indo-Germanic race and hypothesized that they were the subject of the original epic. He viewed Brahmins as contemptuous manipulators who were responsible for ruining the original Indo-Germanic epic through interpolations and redactions.[6] Driven by his ideology, he engaged in a violent reconstruction of the Mahābhārata and Bhagavadgītā.

Holtzmann posited a three-phased textual history of the Mahābhārata.[7] The three phases, according to Holtzmann, were: (1) Indo-Germanic oral tradition, (2) the Buddhist poetic composition, and (3) the Brahminic revision. Using this three-phase textual history hypothesis as a foundation, he fabricated a highly tendentious hypothesis of the Brahmanic takeover of the epic poem. Holtzmann argued that in the third phase of the textual history of the Mahābhārata, the Brahmins took over the epic through a series of redactions and revisions. Specifically, he argued that the Brahmins used these redactions and revisions to introduce new characters, orchestrate the preferential treatment of the Pāṇḍavas, and establish the social order of Brahminism as a timeless and axiomatic truth.

Holtzmann, however, does not articulate precisely what the Brahmins would have revised and redacted. The target of the Brahmanic revisions and redactions is not clear because Holtzmann has not given a consistent and clear description of the first phase. Not only does Holtzmann not clearly articulate the target (Buddhist poetic composition, Indo-Germanic epic tradition, or both) of the Brahmanical takeover, but he also does not provide a rational account of it.

Similarly, Holtzmann hypothesized that the Bhagavadgītā was a pantheistic poem based on the beliefs about courage, the necessity of battle, and the absurdity of the fear of death that Indo-German warriors held.[8] Based on this hypothesis, he concluded that the original Bhagavadgītā was a short work that ended with the second chapter of the Gītā. The first two chapters contained the main ideas of the original poem and subsequent chapters providing only an elaboration or addressing seeming contradictions. Holtzmann designated any elements of the Gītā that did not correspond to his hypothesis as revisions made by Brahmins to introduce theistic elements into the text. He specifically claimed that the identification of Kṛṣṇa with Brahman was a revision imposed upon the text by Brahmins.[9]

By applying this pseudo-historical-critical method to the Mahābhārata, Holtzmann also undertook a reconstruction of the epic in which he made the Pāṇḍavas the villains and the Kauravas the heroes (allegedly reverting the epic to its original state).[10] He had no interest in the epic as it actually existed, no appreciation for its philosophy, nor interest in its narrative. For him, the epic was simply an object that he could manipulate to corroborate his vision of German identity as secular, enlightened, and rational. Holtzmann was essentially using the Mahābhārata as a foil for German history. Similarly, Holtzmann’s reconstruction of the Bhagavadgītā was not motivated by a genuine interest in the work, but rather his zeal to corroborate his vision of the early Germans as free-thinkers by arguing for an original pantheistic Bhagavadgītā.

Richard Karl Von Garbe and Hermann Jacobi, two other pioneers of Indology, accepted Holtzmann’s thesis of an original Gītā and employed a similar pseudo-historical-critical approach. However, they made superficial changes to arrive at more specific accounts of the original text and reached differing conclusions on whether the original was theistic, pantheistic, or both. Their efforts were motivated by their ideology and self-interest, namely making a name for themselves within German academia.

Garbe’s approach as well as that of Jacobi was heavily influenced by the pantheism debate that was raging in Europe during the nineteenth century. Protestants and Catholics alike viewed pantheism as irreligious and as affirming materialism and atheism. This gave rise to a huge divide between theism on one side and pantheism on the other. Many German philosophers and other scholars of the time including Kant, Hegel, and Schlegel were highly critical of pantheism. Schlegel, who had converted from Protestantism to Catholicism, viewed pantheism with great disdain.[11] He viewed it as a philosophy that flatters man’s arrogance and promotes his indolence and blamed it for promotion of superstition and indiscriminate materialism.[12]

Given the great theism versus pantheism debate in European society, German Indologists took a view that the theistic and pantheistic aspects of Hinduism are contradictory, and that the contradiction can only be resolved by adopting a historical comparison to determine which of these two was older. The older would be the original perspective of the Bhagavadgītā and latter would be a later interpolation.[13]

Garbe, who preceded Jacobi, accepted Adolf Holtzmann’s thesis that the theistic and pantheistic elements of the Gītā were contradictory and that the resolution of the contradiction by identifying the older of the two would lead to the identification of the original Gītā.[14] Although Garbe agreed with Holtzmann’s thesis of an original Gītā, he reached a different conclusion. Garbe argued that the Bhagavadgītā was originally a theistic text of the Bhāgavata religion, which was founded by Kṛṣṇa. According to him, the text propounded a rational monotheistic religion promoting the performance of good deeds and rituals. It was only later, after the rise of the priesthood (i.e., the Brahmins), that pantheistic elements were added to the text, and salvation was redefined from eternal self-conscious existence of individual selves to a merger of the self into the pantheistic Brahman.

Jacobi, like Garbe, was influenced by Holtzmann’s thesis and believed in the concept of the original Bhagavadgītā and later interpolations. In his view, the original Bhagavadgītā consisted of chapter 1 and 23 verses from the rest of the chapters that related to the war.[15] The rest of the poem, which is didactic or philosophical, was a later addition.

The original poem centered on the war was related to two divine beings, namely Arjuna and Kṛṣṇa. The poem existed before the Mahābhārata and was incorporated into Mahābhārata. The pantheistic elements were later additions by redactors rather than the priesthood, but there was no conflict between the theistic and pantheistic elements for Jacobi as pantheism was simply attributing the material causality of the world to God. For him, both the theistic and pantheistic interpretations of the Bhagavadgītā were reconcilable with monotheism and the incarnation of God in the world.

The approaches adopted by Holtzmann, Garbe, and Jacobi to the study of the Mahābhārata and the Bhagavadgītā clearly demonstrate that they were not philologists as they had no interest in studying the texts from a philosophical perspective to gain knowledge about their true nature. Holtzmann’s objective was to use the Mahābhārata and Gītā to connect German culture to the epic traditions of India and Greece and to establish the German culture as free-thinking. Garbe and Jacobi, on the other hand, were primarily interested in using the Bhagavadgītā to support their respective viewpoints concerning the pantheism debate that was ongoing in Europe at the time. All these scholars engaged in argumentation to negate and discredit the traditional understanding of these texts that a continuous commentarial tradition had established over millennia. In this respect, these scholars were not engaged in philology but rather misology.

A mature study of ancient texts and accounts does not engage in scientific demythologization. Such a study would respect the texts as meaningful and highlight or uncover profound philosophical concepts and principles contained within them. An immature study of ancient texts, such as that undertaken by these scholars, is mere technique or method and produces nothing of value to society. Not only do such efforts produce nothing of value, but they actually degrade society by turning those who place trust in the unsound and highly speculative theories of scholars into misanthropes.

Indians first lost faith in their texts and their traditions due to the repeated mockery of missionaries and Indologists. In the present, they have become aware of the problems with Indology, but they are no longer able to trust the tradition and so they have nowhere to turn to. They have thus become uprooted, turning to Western culture as the default either in the form of consumerism or Marxism (which is also a form of materialism), but are not able to pose questions of how to live, how to be ethical, the ultimate purpose of life, how to gain salvation, etc.

Whose Common Era?
The History and Spread of Medicine and Medical Knowledge
All Posts