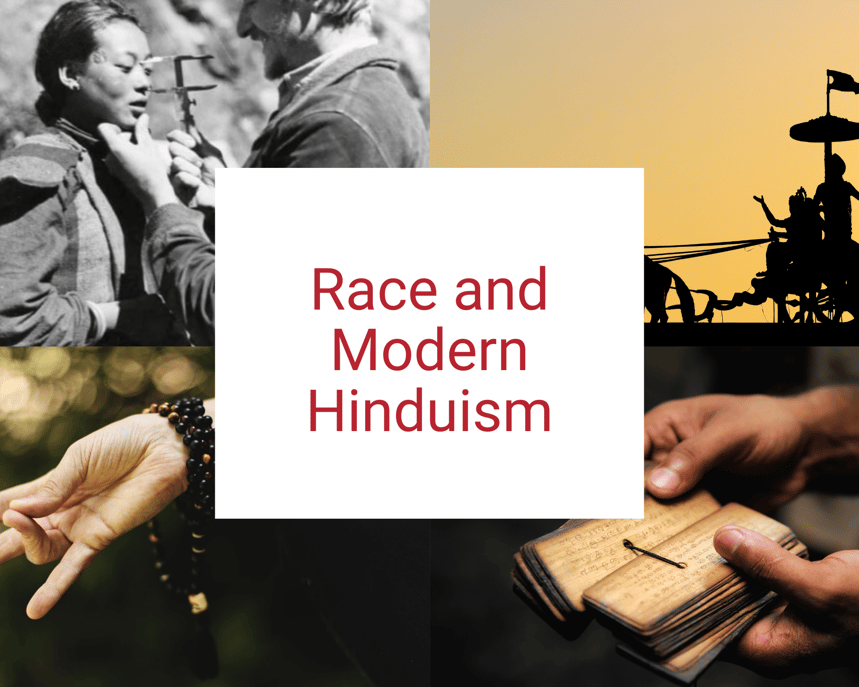 How does one set right an agenda-driven narrative that has not only been widely spread, but also widely bought by young minds? By raising uncomfortable questions, and by having them answered by expert faculty, avers Krishna Kavita ji.

It is quite a blessing to have found such an institution as the Hindu University of America in this stage of my life, after having looked for a safe space where I could be myself and voice my thoughts without fear. A Hindu who is a practitioner and believes in the welfare of all beings, you would think, poses no threat to anyone. Sorry, you are very wrong!

But for the course that I took with HUA: Race and Modern Hinduism by Dr. Joydeep Bagchee in January 2021, I would have failed to understand why there is so much hate and distrust directed towards a Hindu, especially in the US, where we happen to be the most educated and wealthy of the minorities who have also been the most law-abiding.

Knowing both Dr. Joydeep Bagchee and Dr. Vishwa Adluri to be two of the foremost philosopher-thinkers in our world today who are practicing Hindus, as also experts on German Indology, speaking fearlessly the truth of Race Studies, I decided to take this course. It was one of the best decisions of my life, as it answered many questions that have been plaguing me for many years.

Yes, it did push many buttons and boundaries, but Dr. Bagchee, apart from being a very erudite and an exacting professor, is also very generous with his time and in sharing his knowledge. As is Dr. Adluri, who peppered Dr. Bagchee’s lectures with his deep insights.

HUA has been at the forefront of providing a wonderful platform for such civilizationally important and meaningful courses. I am glad I chanced upon it and Shri Kalyan Viswanathan ji was kind enough to offer me a scholarship for the same.

A borrowed narrative called ‘History’ originating from the German Indologists has been put in place in India and the native Indian narrative has been shot down. Indians have unfortunately bought into this narrative and say that we now have to talk about the History of the sacred texts for them to be real. Dr. Bagchee speaks of all this and so much more effortlessly, having studied this topic for decades and having penned a book along with Dr. Adluri - the Nay Science - on the same.

My own past experiences and unanswered questions had propelled me to take up this course. If Indians belong to the same genetic pool as has been proven recently, then where did this idea of Aryan Invasion come from, and why?

Considering how deeply this concept has taken root in India, being taught to this very day in schools as a hard fact, considering the havoc it continues to cause in dividing people of one nation from one another, I decided to devote a semester to learning the causes. Before I enumerate my learnings, I do want to take time to talk a bit about my personal experiences which set the stage for such a study.

In my years at the Foreign Service Institute (FSI) teaching Indian Language and Culture, I watched helplessly as the narrative on Hindus and Hinduism was set by those who were not practitioners. Distorted notions regarding our customs and mores (and hence the politics too) was routinely taught to the Foreign Service Officers leaving for posts in India.

Many students came with their own baggage having learnt either Hindi or South Asian Studies at the feet of Hindu-baiters such as Wendy Doniger and her ilk.  Calling RSS a fascist organization or Baba Ramdev a cheat, peddling the atrocity literature by the Dalit Solidarity groups - all this helped create an atmosphere of intimidation.

Negative news from India was constantly inboxed (the implicit blame always falling on Hindus for all such ills) by one person in particular with strong LTTE links. While Roza and Iftar were made part and parcel of students learning the culture of their host country, any overt Hindu celebration was frowned upon, in fact any Hindu celebration was reduced to a raucous Bollywood party, specifically for Holi or for Diwali, with the religious or philosophical elements toned down. This was done by the Hindu instructors themselves as a matter of self-flagellation.

While Islam got all the respect, and fear of Islamophobia prevented any critical analysis on part of the student, not so Hindu Dharma, which was open to criticism and mockery from all quarters. The school I contracted with, Global Language Center, was also very Hindu-averse - they had an annual Christmas party which was all about beef and drinks and they dare not serve pork, and all the year-end raffle gifts were distributed among their chosen people, not once was I either feted or gifted like they did my other Muslim counterparts despite being a minority Instructor too, the only Hindu.

During daily class hours, every Indian institution was ripped apart by students constantly trying to find issues with anything ‘Hindu’ without labelling it so. Arranged marriages, of course caste, vegetarianism, Modi, and so on.

Everything was also looked at from a feminist lens only - so a wife cooking for her husband was considered patriarchal and regressive, women choosing to wear saris or bindis were illiberal or brainwashed, loving one’s country and standing up for it became fascism and ultra-nationalism.

The language and culture course soon became a battlefield for social justice by American FSOs who were of course fed on a narrative of India being regressive, superstitious, backward etc. along with other subliminal messaging that happens via the predominantly anti-Hindu/ anti-India media in the U.S.

Not one of them (perhaps one or two exceptions in a decade) was sincerely interested in knowing the views of a Hindu practitioner i.e. me without coming in with an inherent bias, with a willingness to learn and a genuine humble curiosity for the ‘other’. It astonished me then as it does now - what is the criteria for being in the Foreign Service if you lack the basic quality of love of exploration into a foreign territory?

There was no attempt made to understand or appreciate a Hindu’s point of view. Weren’t these students here to learn that for which they were paid? No. It seemed that they were neither curious nor interested. In fact, they hated to be corrected. They did not respect someone like me who presented a ‘Hindu face’ to them.

This sad situation did not change at George Washington either. In the Humanities section, whether I took courses on Cross-Cultural Communication or Indigenous Development or even Climate Change and Energy Policy, the professors’ biases, the prescribed books, and the lies that were propagated against Hindus and India were mind boggling. The oft repeated, the greatest lie of all being the Aryan Invasion Theory.

All this while when the insidiousness of Christianity on campus was totally condoned or overlooked. For example, at the yearly Inter-Faith Dialogue dinner I overheard one of the key officials of this group say this aloud, ‘We did not reach them (Sentinelese) correctly, it simply means we have to change our methods (in trying to convert them)’.

This was in response to the killing of John Chau by a Sentinelese (Andaman and Nicobar Islands). How appalling is it that at a time and space which was supposedly set aside for appreciating and accepting the ‘other’, conversion by a militant missionary who entered a prohibited territory was being openly talked of as normal activity!

Coming back to the large-hearted offer by Kalyan ji, who is also Pujya Swami Dayananda Saraswati ji’s student like me, I am most grateful for this opportunity to learn from the best. This course went beyond my highest expectations, not only offering answers to my age-old queries, but also new ideas, concepts and points of view to ponder upon.

Race is an outcome of Christianity and Supersessionism - History and Humanities work for Christianity. From the Christian idea of monogenesis that all peoples arose from a single source, along with the Christian idea of salvation that all peoples have a teleological purpose which ends in being accepted by Christ at the end of the linear journey of life, the superimposition of a natural scientific classification of beings onto humanities/ groups of peoples enabled German Protestants to create a pseudo-science of anthropology wherein they maintained that people moving away from the ideal source (European/German Protestant/Aryan) were influenced by climate and geographies and thus degeneration set in over time.

Race then gave rise inevitably to superiority and inferiority, naturally, and racial hierarchies were made inherent in humanity, just as the Aryans who went South to India and then intermingled with the ‘dark unruly hordes’ there (latter called Dravidians) to produce what we call Hindus today.

As per Oldenburg (a German scholar of Indology), Mahabharata is a prime example of this theory - of Aryans fighting for territory and the degeneration of Aryans into Hinduhood! He sees a decline of the Aryans from the high rational atheistic philosophy of the Rig Veda to the ‘superstitious backward’ Shiva-Vishnu worshipping peoples in the Mahabharata.

Where Dr. Vishwa Adluri sees a great work of literature and Bhagavad Gita as an exemplary gist of the Upanishads in that great epic, the German Indologists who constructed the idea of race and universal history see only decline and degeneracy.

In all this, supersessionism is the key, again a Christian concept which tells us that what is old and traditional must be thrown out as backward and superstitious and the new and modern is to be accepted. What must that be but Christianity and Christ!

Christianity is also about identities and self-consciousness as it does not accept a universal consciousness that unites all beings, the idea of one-ness that is espoused by Advaita for example. Hence any practice that is self-reflective is targeted and criticized, any concept which bases itself on jeevaatmaa which can work itself up with saadhanaa is suspect. There is no concept of upward ascent of the jeevaa, no upward dimension to go to. The experiential practices of Hindus such as Yoga or Dhyaana are thus suspect (as in Alabama schools) and are looked at as the work of the Devil.

For the Hindu, the here and now are of prime importance, we can attain moksha (freedom) in the here and now; we are not obsessed with history nor the future. “The Hindu narrative transcends history, it becomes puraaNa, itihaasa; there is no pretence of history. It has a different prayojanam and phalam and needs a particular adhikaara ….that recognition is built in into Hindu texts.” (Bagchee). Thus, the natality of Hinduism is opposed to embalming death cult nature of Christianity as is described by Nietszche in ‘Dionysius versus the Crucified One’.

All of the above has been very revealing of the ‘Humanities’ that I have been subjected to thus far in my academics. This course has made all that suspect in my eyes. I want to be able to study further to disabuse Indians especially of the horrors that they have been victims of in the name of Social Studies. I look forward to other courses by Dr. Bagchee and other distinguished academics at HUA in the future and highly recommend the same to you too.