The Dharma of Global Sustainability 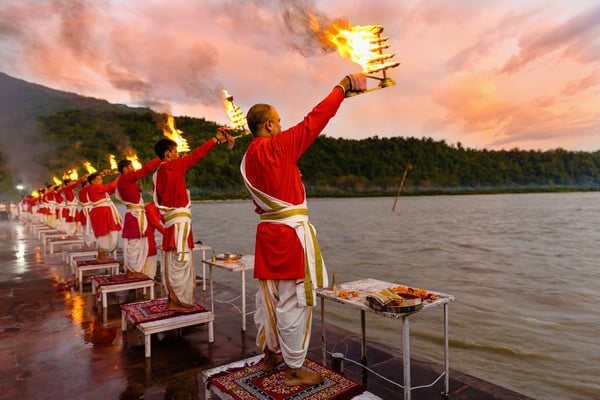 Dharma for Global Sustainability aims to deliberate upon the lessons for Global Regeneration from the ancient Vedic Wisdom of Hindu Dharma.

“Everything happens for the best” is one of the foundational axioms of Hindu Dharma that I grew up with. But it is hard to reconcile this axiom with what we know about the cascading environmental catastrophes unfolding on Earth. Fires, floods, hurricanes, droughts are all occurring at increasing frequencies with greater intensities, even as wild animals are dying out at a faster and faster pace every year. The Earth is on fire in the midst of the Sixth Great Mass Extinction event in cosmological history, while nearly a billion humans are food insecure and 20 million people are dying of hunger related causes each year. How can all this “happen for the best”?

The only way this can be construed to have happened for the best is if the environmental destruction has occurred to help Life thrive in the long run. Life is an infinite game. Starting with simple, single-celled organisms that appeared 3.5-3.8 billion years ago, life has been around continuously on Earth until today. Furthermore, it is estimated that the biodiversity on Earth has been increasing almost monotonically, and as of late, even exponentially, starting with the Cambrian explosion some 540 million years ago.

In contrast, we humans have been playing a finite economic game focused on growth. To promote growth, we have

This is “Kaurava Economics,” the finite game of the Caterpillar, which cannot grow beyond a certain point on a finite planet. Climate change, biological annihilation, the COVID-19 pandemic and widespread social unrest are all indications that we have reached that point. Besides, why would we want to continue playing a game whose rules were concocted mostly in the middle ages, by colonial traders, to systematically siphon wealth from the global South to the global North, currently estimated to the tune of $3T each year? This is why when we pay $3 for a pound of organic basmati rice in retail stores in the US, only $0.05 reaches the poor village family that grew the rice in Orissa, India. In contrast, when the rich donate $3 for a food aid program, they expect at least $2.70 worth of goods to reach the poor recipient. Surely, if we can keep overhead to 10% when material resources flow down the social pyramid, we can do the same when material resources flow up the social pyramid. However, in the current monetary system, money flows from the top down mainly in the form of loans and it is returned back to the lenders with interest through competitive profit taking in commerce. The intent of this money game is to accumulate wealth. If market competition has been overcome through political corruption and predatory acquisitions by “Too-Big-To-Fail” corporations, then
more wealth gets siphoned off during the resource flow. Thus far, the social consequences of such an asymmetrical money game have been mitigated by simply growing the human ecological footprint on Nature. In other words, on the backs of nonhuman animals and ecosystems.

The quest for global sustainability is the quest to transform this finite economic game into an infinite game that is in alignment with Nature. Therefore, the goal of this infinite game should be
to help Life thrive, not to make oneself rich. The quest for global sustainability is akin to the metamorphosis from the Caterpillar to the Butterfly. In line with that analogy, the COVID-19 pandemic has put humanity in the Chrysalis phase, as if Mother Nature has sent us to our rooms to think about what we have done during the Caterpillar phase. Will we emerge from our “time-out” vowing to resume our destructive mischief or will we get serious about realizing our potential to be Butterflies?

Dr. Sailesh Rao is offering a course on Dharma of Global Sustainability at Hindu university of America. More details about the course can be found here.

To learn more about his work, please check the website given in his Author's profile.