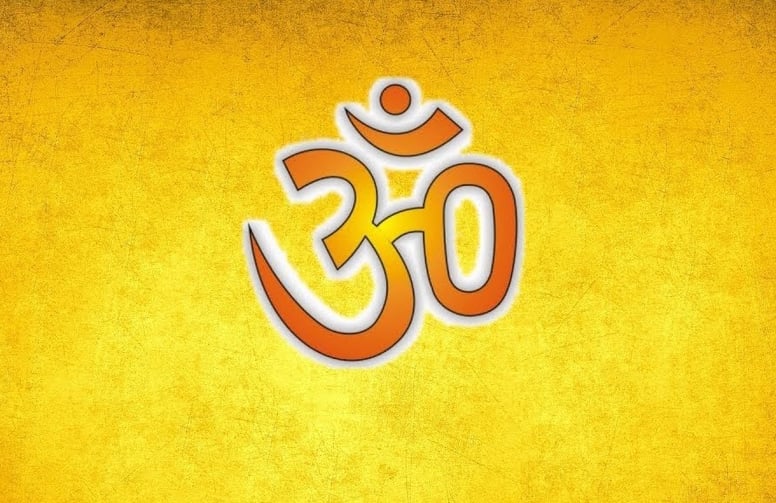 From songs to movies, bumper stickers, tattoos, meditation classes, clothing lines, and yoga sessions, Om is chanted and adorned, but is the meaning of Om actually understood?

The symbol Om is used across the globe in highly diverse contexts, and to the typical westerner, carries vague associations with spirituality. From songs to movies, bumper stickers, tattoos, meditation classes, clothing lines, and yoga sessions, Om is chanted and adorned, but is the meaning of Om actually understood? Referring to Om, the Māṇḍūkya Upaniṣad states, “Om is all this. All this is surely Brahman. This Self is Brahman. The Self, such as It is, is possessed of four quarters.”[1] This expansive definition of Om is explored in detail using catuṣpāṭ, the four quarters model, overlaid on the letters comprising Om: A-U-M.[2] This offers an analysis of the same person from different perspectives to illuminate the true nature of the Self as identical with Om. In the process of defining Om, another practical prakriyā is delineated. This essay will explain the traditional meaning of Om and the method of exploration of the meaning in the context of Advaita Vedanta.

The Māṇḍūkya Upaniṣad begins describing the first quarter, called Vaiśvānara, as the waking sphere of activity, including all that is tangible and physical in the universe. The self at this state is the knower of objects and knowledge is directed outward. All beings are confused at this level of experience, thinking ‘I’ refers to the body. This prakriyā is reminiscent of the śārīra and kośas methods previously explored, and again points to the practicality of śruti. Śruti then equates Vaiśvānara with the letter A “because of the (similarity of) pervasiveness or being the first.”[3] In Sanskrit, the letter A is the basis for all further speech. It is the initial sound generated in the throat by opening the mouth and making a sound. It pervades all speech. Similarly, Vaiśvānara pervades the whole manifest universe, thus identifying it with A.

The second quarter is Taijasa, “whose sphere (of activity) is the dream state, whose consciousness is internal…and who enjoys subtle objects.”[4] Impressions in the mind from waking experiences are impelled to reappear in the dream state. The self is only aware of internal objects as Taijasa, and witnesses cognition by its own luminosity. This sphere of activity is associated with the letter U. The letter U occurs between A and M just as Taijasa is intermediate to Vaiśvānara and the third quarter, Prājña.

Prājña’s sphere of activity is the sleep state, the dreamless state. This is deep sleep, where the person is not enjoying or experiencing anything. In this state, “everything becomes undifferentiated…a mass of mere consciousness.”[5] This analogy of a mass is meant to convey the idea that the vṛttis in the mind experienced during the waking and dreaming states are totally absent. It is as if a darkness has fallen, covering everything, becoming an indistinguishable mass.[6] As we have seen in other prakriyās, this is viewed as a state of joy “caused by the absence of the misery involved in the effort of the mind vibrating as the objects and their experiencer.”[7] In this state we rest in Īśvara as we exist in the causal body and ānandamaya kośa[8]. However, this is not the bliss of limitlessness itself, because the joy is transitory, not absolute, as well as absolute, and one is not self-aware enough to register one’s freedom from duality at that time.

The letter M corresponds to this third state being the third letter of Om. At the end of the pronunciation of the syllable Om, the letters A and U seem to merge into M and also at the time of origination of Om. This is made sensible by repeating Om. Doing this, the practitioner will realize how A and U merge into M, but also arise out of M to pronounce the syllable again. In the same way, Vaiśvānara and Taijasa merge into Prājña and arise out again as the self moves into the dream and waking states again.

This analysis then leads beyond the letters, the sound, all duality, and any need for attainment to Turīya, the fourth quarter. “The partless Om is Turīya- beyond all conventional dealings, the limit of the negation of the phenomenal world, the auspicious, and the non-dual. Om is thus the Self to be sure. He who knows thus enters the Self through his self.”[9] Turīya is recognized as what obtains between 2 utterances, oral or mental, of Om. Here is the phala of this prakriyā. Through understanding the meaning of Om and using it as a prakriyā to be meditated on, we are led from understanding ourselves as limited beings, to ourselves as the all-pervasive consciousness, self-existent in all things, all times, all places. Put another way, Om is an upāsanā on Saguna Brahman to bring us back to our svarūpa as ātman, none other than Nirguna Brahman. The Turiya, the silence after the sound of Om, resolves back into the silence of Brahman. But in the same way silence surrounds and pervades the utterance of Om, the Turīya surrounds and pervades the other three quarters. It is always present everywhere. It is not a supra conscious state as some modern Vedanta teachers propose, but rather the ‘I’ that is present in all states. Another way of understanding Om is that the first three states corresponding to A-U-M are incidental, mithyā, and only Turiya, ātman/Brahman, is intrinsic, inheriting in all of them, the satya of all of them. Ātman is satya. This is reminiscent of the definition of Brahman in the Taittiriya Upaniṣad.

The meaning of Om in the Māṇḍūkya Upaniṣad offers a very different understanding of the syllable compared to common usage in western cultures. Om is aligned with catuṣpāṭ as a means of revealing the all-pervasive nature of ‘I’. This also serves as an upasana leading the aspirant to the negation of all duality, to an understanding of Om as the very nature of Brahman itself as birthless, undecaying, without cause, and without dimension. Quoting Gauḍapāda’s beautiful closing verses of the kārikā, “One should know Om, to be God seated in the hearts of all. Meditating on the all-pervasive Om, the intelligent man grieves no more.”[10]

Takeaways and Surprises on How Hindu Dharma Transformed America
Arjuna’s Problem and Bhagavān’s Solution: A Reflection
All Posts