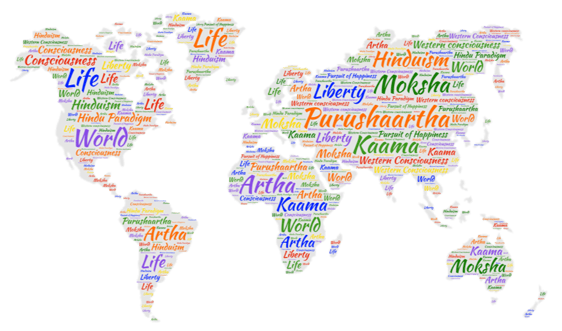 How the Hindu concept of Puruśārtha can help make the world a better place by placing "Pursuit of Happiness" in the right perspective.

“We hold these truths to be self-evident, that all men are created equal, that they are endowed by their Creator with certain unalienable Rights, that among these are Life, Liberty and the pursuit of Happiness.” This quote from the United States Declaration of Independence (DoI) is often pointed to in order to bolster the claim of exceptionalism of the United States and Western culture in general. But what suppositions are implied by this statement, and how can the academic study of Sanatana Dharma function as a counter balance? Specifically, how can the insider voice of the Hindu educated without the historical lens of Orientalism and Indology contribute to the attainment of universal human goals of justice, peace, and respect where the western ideal, as modeled in the Declaration of Independence, has largely failed?

As the colonies finally determined to break from Great Britain due to taxation without representation and the aggressiveness of the British in Boston, they drafted the Declaration as a statement of freedom from the perceived oppression of the king, giving a “powerful voice to the values behind the American Revolution.”1 However, the issue of slavery was omitted, despite evidence that Thomas Jefferson wrote a section to be included condemning the evils of slavery “foisted upon the colonies by the British crown.”2 This omission has cast doubt amongst critics as to the legitimacy of the phrase ‘all men are created equal,’ leaving the question of American exceptionalism up to debate.

However, when viewed through the Hindu lens of puruśārtha, it is argued that something even more damaging to the long term growth of humanity resides in this document that directly correlates to the current state of the United States, with widespread denial of the pandemic, science, and truth. The concept of puruśārtha within Sanatana Dharma denotes the four main human pursuits and describes “that which is longed for by…purusha, the human being.”3 These include dharma, ethics; artha, securities; kāma, pleasures; and mokṣa, liberation.4 The concept of dharma is subtle within Indian thought and includes ethical behavior towards others at every level, social order, cosmic order, sense of duty, service to the community, self-expression, and as a means for mokṣa.5 This all-encompassing term has particular significance for the argument at hand. Artha refers to all things that bring a person a sense of security and includes things like money, power, social status, property, etc. Kāma is sensual pleasure of many different kinds and its attainment is driven both by instinct and personal value systems.6 In this model, dharma serves to restrain or confine the pursuit of artha and kāma, meaning they are not ends in and of themselves, but are an important part of the human experience when seen in the proper context.

The Declaration of Independence states that the pursuit of happiness in an inalienable right assured to us by none other than God. Yet, what is happiness? No definition is provided. Is it assumed that the answer to the fundamental question of human life is exceedingly apparent to the authors? Lost in time, perhaps, is a contextual answer to this question that could have informed the unabashed pursuit of happiness that resulted. Instead, this seminal idea has led to an extreme sense of individual rights and the pursuit of artha and kāma without the restraining and guiding influence of dharma. This has led to a pervasive lack of concern for the wider community beyond one’s immediate family or like-minded neighbors. We need not look further than the fundamentally selfish and irresponsible response of the US to the pandemic. More important than the welfare of the most vulnerable in our country are the ‘inalienable’ rights to not wear a mask and completely disregard science, while simultaneously hold church services, leading to super spreader events and more death. This seminal idea of the righteousness of near total freedom to pursue undefined happiness for the individual insinuated in the opening lines of the DoI has grown into a massive, ostensibly indestructible weed that threatens to breakdown already tenuous ethical concern for others.

Contrast this with puruśārtha, identifying mokṣa as the main goal of human life. Artha, kāma, and dharma all serve this goal. The pursuit of dharma, security, and pleasure are not condemned, but are seen in a much larger context. This world view is counter to that in the US and can serve to provide meaning and structure to all in a society. These goals are open to all. There is freedom implied, but in a way bounded by dharma with an eye to an ultimate goal shared by all humans. There is compassion implied, not just to humans, but to all beings, to the earth. What would the US look like if its citizens had a semblance of these ideas enshrined in the DoI instead?

Here is a model that the insider, the Hindu or adherent to Santana Dharma can offer the West. But, to do so, there is a need for systematized insider education about the worth and tremendous value of these concepts freed from the lens of Indology. Viewing Sanatana Dharma through the lens of the prevailing academic paradigm completely distorts the reality of these traditions and convinces the insider that the ‘truth’ of the outsider is the only voice. This must be reversed. How?

To this day the only person in human history to bring about prodigious change in a completely nonviolent way is Mahatma Gandhi. The core ideas of satyagraha, holding firmly to Truth, can be applied to developing a new paradigm of Hindu thought. Gandhiji’s technique was to force the English to realize the suffering their rule imposed on Indians by absorbing that suffering and reflecting it back to the British. He and his followers allowed the British to experience their own humanity thus freeing them to see the humanity of the Indian, paving the way to independence.

The modern Hindu, educated by the insider with accurate information about the greatness of Bharat in science, mathematics, psychology, astronomy, literature, etc, and a clear understanding of the value of the spiritual, philosophical, and religious traditions of Sanatana Dharma can practice satyagraha in the face of those representing the prevailing paradigm. Holding firm to the Truth and expounding this to others using multimedia campaigns, development of new education systems, and demonstrating a new emergent consciousness of pride in being Hindu will slowly create a sea change. Eventually, the tipping point will be reached, just like Gandhi ji’s work, but this takes a willingness to sacrifice and hold firm. Asking others to change is a recipe for failure. Others will not change entrenched opinions unless the insider changes and demonstrates the gifts of a higher way of being.

A formal system of Hindu education to build a new paradigm to challenge Orientalism and Indology is vitally necessary to prepare the modern Hindu to bring a worldview based on the ‘technologies’ of Bharat to the world. The West has improved artha for millions of people around by producing helpful medical technologies and other products, but this is not enough. The sole pursuit of artha and kāma will only prolong avidya and suffering. We are seeing that now around the world with constant warfare, increasing selfishness, and the fall of dharma. For the advancement of humankind, the clear voice of the Hindu must be heard.

1 Williams, Yohuru. (2020, Jun 29). Why Thomas Jefferson’s Anti-Slavery Passage was removed from the Declaration of Independence. History.