Posted on November 25, 2020 by Eashwar Thiagarajan 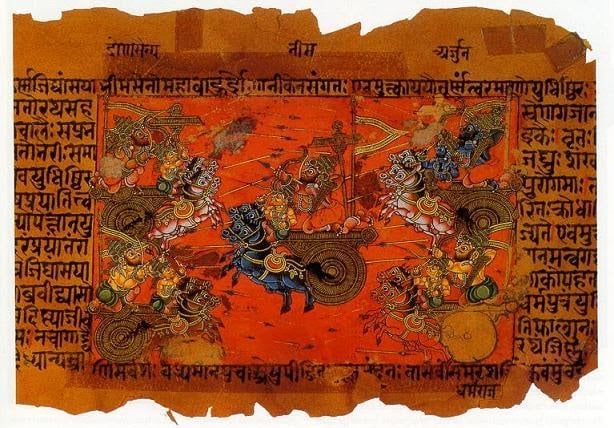 Śrī Vyāsa aspires to influence our view of the world, life in general, and of Self; by painting a more enriching narrative, through the poetical, layered narrative in Mahābhārata.

(Background: This blog is a reflection, or Mananam, triggered by Śrī Vishwa Adluri ji's profound insights on the topic of Śrī Vyāsa's ethical approach to storytelling.)

Professor Śrī Vishwa Adluriji - a leading exponent and expert on the Mahābhārata, and my teacher of the HUA course on The Mahābharata War, made a remarkable observation, about how Śrī Vyāsa humanizes the Mahābhārata by virtue of his poetic, narrative approach. This poetic, narrative approach, laced with metaphors and similes and focused on the "specificity" with regards to individuals, is an ethical lens through which Śrī Vyāsa presents people, events, discussions and philosophical deliberations. If not for this “poetic-narrative” approach, the events of the past would be reduced to a set of events, compiled with scientific temper, but of no humanistic or spiritual value.

Professor Adluri's viewpoint is that to describe inanimate objects, a dry scientific approach would suffice. But when it comes to talking about human beings, we need a narrative which enables us to understand and connect with the human condition (its glory, frailty, divinity, aspirations, emotions, etc). This is where poetry plays a significant role.

Poetry laced with similes and metaphors, preserves the distinctions at an individual level. The individual is more than just a line item in a large spreadsheet. Śrī Vyāsa spends adequate time with several characters, painting us a word picture of their character traits (say for example of Abhimanyu) as viewed from different standpoints - the standpoint of the father (e.g. Arjuna's view of Abhimanyu), mother (e.g. Subhadra's view of Abhimanyu), teacher (e.g. Śrī Kṛṣṇa's view), and so on and so forth.

The ethical appraisal of Śrī Vyāsa's project, namely the Mahābhārata, can be better understood if we understand the very philosophical basis of ethics, in light of Upaniṣadic wisdom. For this, I resort to Advaita Siddhanta's interpretation of the Upaniṣad. This forms Section II of this blog post. Section III briefly touches upon the two main objectives of Śrī Vyāsa's story telling (seen in light of Prof Adluri's comments), knowing which, we may appreciate the purpose of the Mahābhārata, properly. Section IV summarizes the reflection.

Translation: In the beginning, this (universe) was but the Self as Purusha. He reflected and found nothing else but himself. He first uttered, ''I am He''. Therefore, he was called Aham. Hence, to this day, when a person is addressed, he first says, 'It is I,' and then says the other name that he may have.

As the Bṛhadāraṇyaka Śruti above indicates, everyone—in essence—has their existence or Being, rooted in the One, Only and Original “I” or “Aham” — namely Brahman.

Advaita Siddhanta (through Śruti, Gīta, Brahma Sutras and Bhagavān Ādi Śaṅkara's commentary) establishes beyond doubt that this “I,” or Aham or Sense of Being, is Brahman: The unqualified, attributeless, reality—indicated by words: Satyam (Absolute existence); Jñānam (Absolute knowledge); Anantam (Infinity) (Tai. Up Brahmadanda Valli).

We can infer on this Advaitic premise that the individual's commitment to an ethical living is rooted in the individual's essential identity with the world around him. I don’t become angry with myself, when I accidentally bite my own tongue. Similarly, my interaction with the people, the world around me, is grounded in my understanding and acceptance of the non-dual nature of Reality — a sense of Oneness.

To make this point about non-duality further, I quote another Śruti (Māṇḍūkya Upaniṣad verse 7). According to this Śruti, my Being is revealed to be ekātmapratyayasāram (Self-evident Consciousness), prapancopaśamam (that into which the duality abides), śāntam (peace), śivam (auspiciousness), and advaitam (non-dual). The last word, Advaita, is the key.

This Oneness of Existence is the basis of Ethics, according to Advaita.

I am not implying that ethical living is possible only to the Jeevan Mukta, or the realized soul, to whom prapancopaśamam is an accomplished fact (i.e. He who sees everything is verily One). Such Jeevan Muktas are indeed rare, as Śrī Kṛṣṇa Himself acknowledges - vāsudevah sarvam iti sa mahātmaa sudurlabhah [Gīta 7.19].

What I am implying here is that even an intellectual understanding of this Advaitic truth or the vision of Oneness of existence, puts our ethical bearings on stable philosophical ground and helps evolve one's ethical quotient.

The foremost exponent on this topic of Ethics and Advaita is Swami Vivekananda. Let us conclude this Section II with a quote from Swamiji.

“What is the watchword of all ethical codes? "Not I, but thou", and this "I" is the outcome of the Infinite behind, trying to manifest Itself on the outside world. This little "I" is the result, and it will have to go back and join the Infinite, its own nature. Every time you say, "Not I, my brother, but thou", you are trying to go back, and every time you say "I, and not thou", you take the false step of trying to manifest the Infinite through the sense-world. That brings struggles and evils into the world, but after a time renunciation must come, eternal renunciation. The little "I" is dead and gone”

Now that I have made my point of how ethics is firmly rooted in Upaniṣadic wisdom (i.e. Advaita Siddhanta), we have to proceed to reflect upon Śrī Vyāsa's narrative approach in the Mahābhārata.

The main purpose of Śruti (i.e. Upaniṣads), is to reveal to us the divine dimension of our Being and eventually help us transcend all duality and recognize our infinite non-dual nature.

So Śrī Vyāsa, as a teacher rooted in Śruti, is solely concerned with (a) ethical human upliftment, and (b) eventual self-transcendence (i.e. discovery of our infinite nature and thereby putting an end to suffering).

Hence, it becomes unavoidable for Śrī Vyāsa as the Itihāsa Kartā (composer of Itihaasa), to take up the events of the past and present them to us, through the poetic-narrative storytelling lens, to accomplish the aforesaid dual objectives.

If Śrī Vyāsa had gone about drafting the Mahābhārata like a modern-day historian or scientific chronicler, his presentation of facts of the past would be highly dehumanized (as Prof Adluri pointed out, in the class). So, empathy is the key here and the need for students of Mahābhārata to emotionally relate to the various characters; their respective thought process, choices and travails. This is where poetry, laced with similes and metaphors play a huge role.

At one level (Pravṛtti) Śrī Vyāsa helps us recognize the human condition borne out of Avidya (or Ignorance of our Infinite Dimension) and the consequent actions, choices and struggle for perfection. By doing so, he is being ethical in his treatment of the characters of the epics. ---------------> Important

At another level (Nivṛtti), he helps us recognize the changeless amidst the changeful (i.e. Self of the nature of pure consciousness), the Brahman of the Vedānta, the Vāsudeva of the Pañcharātra, the Paśupati of the Pāśupatas, etc. Thus, Śrī Vyāsa also shows the door to liberation. This way he is being ethical in his treatment of the student or the reader of the epic. ---------------> Important

Now both these dual objectives at Pravṛtti and Nivṛtti level can only be achieved, by offering a storytelling device; a narrative which is immersive and impactful on the reader.

Then and only then, will the study of Mahābhārata, be a transformative experience to the reader.

Human beings live in their own narrative; as to who they are, what this world around means to them (i.e. their relation with this world). Śrī Vyāsa aspires to influence their view of the world, life in general, and of Self; by painting a more enriching narrative, through the poetical, layered narrative in Mahābhārata.

Hence, resorting to poetry (which facilitates the emotional connection between the reader and the characters), and the layered narrative storytelling techniques (which operate on the reader at various psychological levels), becomes not only important but also necessary.

So the important thing to note, reflect upon, and eventually accept when it comes to the critical appraisal of Mahābhārata, is that even though the content of the narrative is based on events in the past, it is the narrative itself that has the dominant upper hand of influence upon the reader (rather than the historicity of the events).

Thus ensuring that we not only connect with our ancients, but also be guided by Upaniṣadic wisdom, to felicity. Śrī Vyāsa essentially de-hypnotizes us (who otherwise spend our life harboring the notions of our finite, limited individuality) thereby enabling us to eventually recognize our infinite dimension.

This dehypnotization project, viewed through the ethical narrative lens of Śrī Vyasa is called Mahābhārata.

If we don’t understand this psychology behind Śrī Vyāsa's narrative lens, we end up oversimplifying Śrī Vyāsa’s presentation of Mahābhārata as being ONLY an Historical account – i.e. everything that is depicted is historical, or reject things in Mahābhārata that have no historical value (a very western notion of history centric thinking).

Such a limited view of Mahābhārata is gross injustice to not only the ancients - our human ancestors about whom we are studying, but also an injustice to humanity at large, which would otherwise be deprived of the Upaniṣadic wisdom and vision of Oneness.

To repeat the central theme of this blog post: By learning to appreciate the ethical narrative lens fitted by Śrī Vyāsa, (as Prof Adluri pointed out), we make the best out of our Mahābhārata study experience, whereby we learn about our ancients by empathetically connecting with them, and in the process, evolve as individuals and eventually transcend all limitations (including the individuality itself).

This is the Key !