My Journey Towards Hinduism 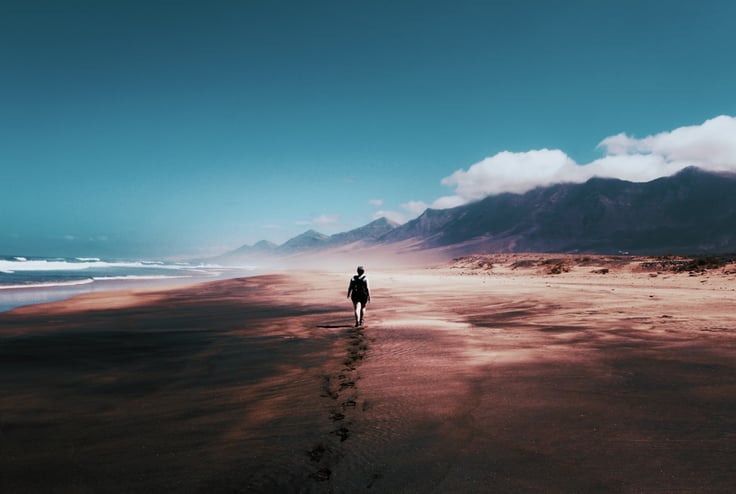 A personal reflection of a seeker from Brazil, who found answers in Hinduism.

My Journey Towards Hinduism

It has been a nice surprise to learn from the Orientations to Hindu Studies (OTHS) lectures. To give a little background, I have recently become more active in terms of looking for both spiritual and Hindu (or Sanātana Dharma) knowledge. In 2020 January, I experienced one month in an Ayurveda College near Coimbatore, in Tamil Nadu, India. Then my life changed completely. I experienced a sense of well being as I never knew was possible. When I arrived back in Brazil, I looked for i) possible ways to return and very soon, arranged a pilgrimage to do in Himalayas in April (that trip was cancelled because of coronavirus), ii) how to retain that sense of well being while still trying to improve, (I’ve already quit eating meat, drinking beer, eating sugar and similar stuff). I started to look for any kind of knowledge about Hinduism, Vedic Culture and Yoga (not in a western way or from its perspective, but from an Indian point of view). In the beginning it was a very challenging journey since I did not know anything about - where to look for knowledge, who to follow as spiritual guider, who not to, where to study Yoga in a serious manner, how to learn things in an authentic form that does not bring the western view into all the richness of that culture that I had experienced for a whole month with the best body and health balance ever reached.

Then, the world kind of stopped (due to corona), and I could search, research, look for, enroll into courses and learn so many things during last year. I would say it was a kind of spiritual fast track, when what I did not do in the previous 30 years, I could and I did during last one-year-journey, especially because of the online opportunities that came about. In the middle of all this, I found Hindu University of America (HUA for short). Immediately it drew my attention. On one hand, it had the word “America”, a thing that I instinctively mistrust (I really do not know if Indians still have any issue with the English – as their previous colonizers; but anything that has to do with “America”, I know at the very first sight that it is correct not for Brazilians, because our interests are usually not the same. PS: I know that I am a minority around here). Therefore, I thought that HUA would be about some western point of view on the Vedic-Hindu culture. To my total surprise, I found that at HUA, people really engaged in the transmission of knowledge in the best way possible, including many criticisms about all the issues that arose during and because of colonization, especially the British Raj.

It was quite a surprise, that Indians also have trouble and issues in understanding their own History. This is because a false History was sold to them, as stories, by the colonizers with great efforts, and also due to capitulation by the colonized. It is truly sad that Indians have given up on their true History, and that their tradition, which is the key in that entire subject of History, was not kept safe, at least within the country. It has been inevitable for me to trace some parallels with Brazilian History, which incidentally does not start with the “discovery” in the 1500s. Instead, we, Brazilians, also have a very ancient culture of indigenous people with huge wisdom about nature and natural medicines, and ancient customs. This seems even more prominent when we talk about Indians or their descendants that live or were born abroad.

When I began listening to the OTHS course lectures, I did not know what to expect. Earlier, I had read some western authors referring to the  Vedic Hindu Cultures. One such example was Friedrich Müller, who in one small book compiled three lectures he gave with some parallels about western thinkers well known to everybody. I needed to go back there and check for some improprieties, but I did not yet have the knowledge about the purity of the message or the correct message, which comes clearer. The multiple texts which can be studied in  Vedic Hindu Culture are so rich, with such beautiful explanations some of them about things that I do not know myself and do not know anyone else who satisfactorily explains the matter or the subject). That is why the teachings are so precious! In addition, they existed for thousands of years since they appeared in a written way, and for even longer when they were transmitted orally.

In the texts we learned of and read during the course so far, there were some striking points that called my attention. i) Even though it is quite imaginable that the colonizer needed, as strategy, to divide to conquer, or belittle the colonized, it was a huge surprise to learn that the holy relationship between a disciple and the Guru, e.g., Swami Vivekananda and Swami Ramakrishna, could be subverted in the way that was described in one of the texts. Moreover, it came as an even bigger surprise that the “author” was awarded with a prize for his research and for “quality”. It wasn’t just enough to encourage the spreading of the misunderstanding and misinformation, but there was a need to also increase its value and reward it. For what purpose? ii) Then came the questions about what we know now as general knowledge of all things that were “discovered” or “developed” by some European scientists in the last few centuries, when in reality, these were already mentioned in ancient texts in  Vedic Hindu culture. E.g., About the Universe and the relationship between it and our own body and the smaller organisms and matters, it was amazing that this was already mapped and described in detail in ancient Hindu texts.

It was quite amazing to see that when we look at different religions in a comparative way, we observe that Hinduism was always around the India and Himalaya regions, while all other religions came from abroad from farther places around the world. This can be easily explained as in the last millennia India was suffering with outsiders ruling it. Once I had asked a meditation teacher here at home why India is the nest of so much culture and spiritual evolution and yet lives in a full misery nowadays. He answered that India’s history has many millennia, and only in this last one, it fell down in disgrace. If we really recollect the official reasons justifying ‘the Great Navigations’ from Europe, from the end of 15th century onwards, it was to find new routes to get Indian spices and silk. If just spices and silk, which at that time were so much of a thing, were capable of leading to the discovery of new routes,, imagine what could be done if all efforts come together in today’s time, with all that scientific knowledge with funding coming from western countries, such as US, Germany, France, England and much more. We probably would have reached a lot more enlightenment in a few years of nice and frank cooperation, than in the last centuries., I say so because all “discoveries” that have happened recently, go on to confirm many of the insights or teachings already into ancient texts of Hindu Cultures.

In this context, we find that leads to not only theoretical answers, but fully practical answers to questions like who are we, where have we come from, where are we going, what are we doing here, and so on. So much effort has been put by the west in “discovering” things which have been mentioned (and even explained to some extent) in the ancient Vedic Hindu texts. Such texts, where knowledge is already known to complement the researches of the past two centuries, could have been used to reach further ambitious goals and look for outcomes that are more complex. On the contrary, the west has put in double (or even triple) the efforts to (re)study the subjects from scratch and to learn much, before the scientists could discover or bring a subject or a concept into light within the western paradigm; a subject on which there often is much already written in Vedic Hindu cultures. Also, we have a huge difficulty with respect to the language (Sanskrit). Only when we learn it would we be able to start thinking about meaning and what it could bring to our personal journey, in spiritual as well as material fields, depending on our search. Obviously, distortion can happen in any written material because it is subject to human interpretation. As a lawyer, I know that we would be able to interpret a text in as many different ways as the number of people who read it. I remember that the Bhagavad Gita was the most wise book I had ever read, and only one that was perfectly capable of answering the very difficult question that arises when starting one’s own journey into the spiritual path, which is; is it possible and how to balance the material life and the spiritual efforts? In western approaches, I always felt as if there were two different and opposing ways that could not coexist. Nothing can be farther from truth. There are so many contributions from ancient texts to different fields of life, including our perception to see ourselves and all things around us. That is really a pity that the studies in western paradigm does not approach it in a “pure” manner to look into all these already existent and produced materials to push more up and go further with knowledge as a whole.

I would very much like to search and research to write. I am looking forward to finding stimulating topics that interest me in the next few months to start some quality productions. I may shine light on aspects that are already brought to light and often misunderstood by western writers, in order to clarify them. There are many difficulties and learning issues to be faced ahead, but I think that it is the need during these pandemic times, when the human suffering is so high because various small things such as staying locked inside homes for some weeks together. I am already enrolled in some courses for the next quarter. I cannot wait to see all the new approaches and ways to learn about such interesting subjects.

Why Spirituality for the Youth?
Reflections on Hindu Studies – An Eye Opener
All Posts