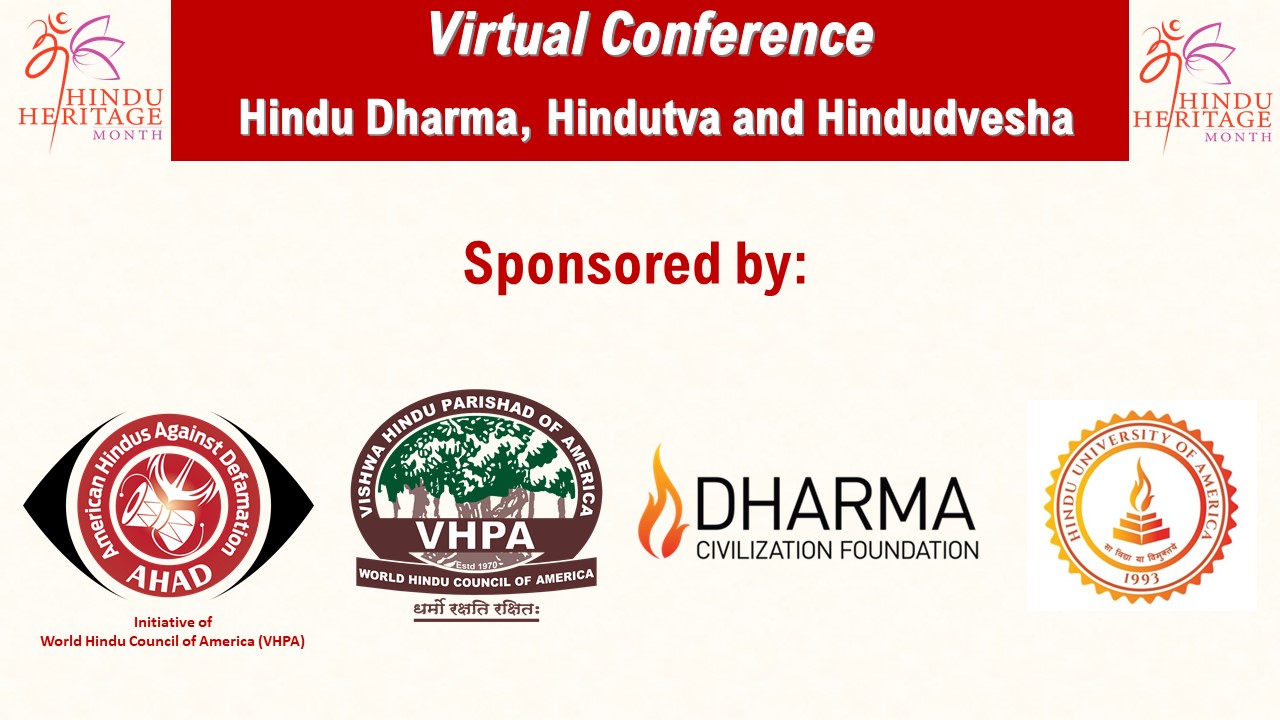 “Dismantling Global Hindutva” is a new phrase that is designed to galvanize and unify the forces of Hindudvesha, while gaslighting and confusing the Hindus worldwide. It is a clarion call for a sustained program of action, with violent undertones, not just a forum for seemingly innocuous intellectual discussion. It is Hindudvesha in the raw, i.e., a settled and ideologically driven, institutionalized hatred for Hindu Dharma and the Hindu people, bold, unvarnished, and unembarrassed. As this phrase gains momentum through sheer repetition – it should be recognized as a call for violence, an ethnocide i.e., a cultural erasure that has the potential for the legitimation of violence against the Hindus on a global scale.

What is the relationship between Hindu Dharma and Hindutva?
Are they simply different names for one and the same phenomenon? When someone is seeking to ‘Dismantle Global Hindutva,’ are they merely problematizing a phenomenon called Hindutva that they define on their own terms – or are they really targeting Hindus as a whole, in the guise of dismantling Hindutva? Are they naming some subsection of the Hindu community who are allegedly ‘Hindutva’, and seeking to divide the Hindu community into “Good Hindus” and “Bad Hindus”, or are they reserving the right to label any Hindu as ‘Hindutva’ at their own moment of choosing, with all the consequences thereof?

What is Hindutva anyway? Who owns the definition of the term ‘Hindutva’?
Do the enemies of Hindu Dharma get to define what Hindutva is? Does it refer to the ‘essence of being’ a Hindu i.e., the ‘Hindu Tattva’? Or does it refer to a specific historical movement that came into being in the 1920’s in India to protect Hindu Dharma? Do we need a contemporary clarification of what this term ‘Hindutva’ really means – today – for our generation?

What is Hindudvesha?
Is it the same as Hinduphobia or Hindumisia or a form of Hindu-baiting or Anti-Hindu rhetoric? Where does it emanate from, and to what purpose? Is it a new phenomenon or has it been around for a long time? What are the characteristics of Hindudvesha? How should the Hindu community respond to this rising drumbeat of global Hindudvesha, wearing this garb of ‘dismantling Hindutva’? Is being silent an option? Does it not fulfill the very mission of Hindudvesha i.e., to silence the Hindu voice? How do we protect, preserve, and transmit our Dharma for our future generations, without speaking up?

To address many pressing questions that one billion Hindus around the world are facing today, this conference, held between October 16th and November 7th as part of the Hindu Heritage Month. It served as a platform for a diversity of voices and a variety of perspectives from within the Hindu world and featured friends of the Hindu community from other adjacent traditions.

Watch the video for more information about the conference

What is the relationship between Hindu Dharma and Hindutva? Are they two different terms that represent the same phenomenon? Or, are they slightly different phenomenon? How do we best understand these two phenomena and their inter-relationship?

What is the genealogy of the terms Hinduism and Hindutva? What is the Hindutva movement? Why is it portrayed so negatively by its detractors? Can we clear up the misconceptions about Hindutva?

How have Christian Theology and Critical Race Theory colluded to essentialize and demonize the Hindu world? How does this collusion continue to malign Hindu Dharma and Hindutva today? What should Hindus do about this persistent challenge?

How do we understand the Hindutva movement within the context of Coloniality and the imperative of reclaiming indigeneity? What are the prospects and pitfalls of this movement as it exists today?

What is Islam's record in India? Have scholars dealt with the Islamic record in India honestly? What has been the impact of Islam on the Hindu culture and psyche?

Panel 2: The Challenges Faced by Hindus in Islamic Regions

What has been the plight of Hindus in Pakistan, Bangladesh, Afghanistan and Kashmir? What is the source of the Hindu ethnocide within Islam?

Panel 1: Impact of Post-Colonial Hangover on Hindu Arts and Culture

How does the postcolonial hangover impact the Hindu arts and culture ecosystem? How are the traditions affected by the ambient pressure towards Secularization and De-Hinduization?

Panel 2: Hindutva - When we let others define us

The negative charge that the term Hindutva is loaded with today, arises from a sustained campaign. How can we frame (or reframe) the term to discharge this negativity?

How has the Aryan Race theory constructed and framed both Hinduism and Judaism as a problem that needs a solution? How does this threaten both communities?

Panel 2: Hindutva - When we let others define us

The negative charge that the term Hindutva is loaded with today, arises from a sustained campaign. How can we frame (or reframe) the term to discharge this negativity?

Hindutva - When we let others Define Us

Why is protection of Hindu Dharma a civilizational imperative - especially in a geopolitical and media environment that is so hostile to it? What is the role of Hindutva in such a context?
Posted in Global Impact of Hinduism, Academic Hindu Studies, General

Yog-Darshan — The Story of Yoga
All Videos